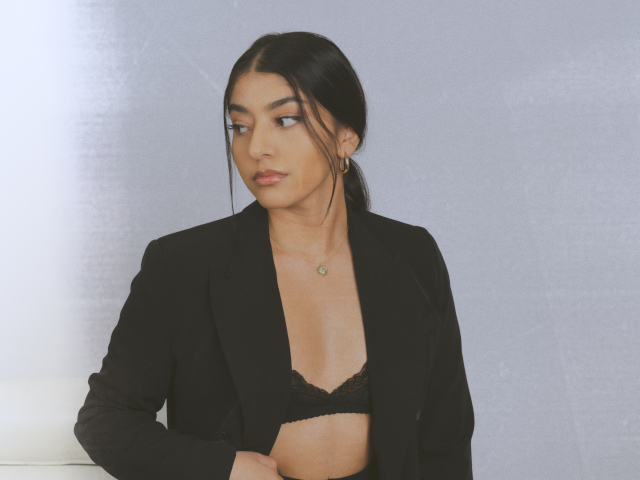 KIANA is a Toronto based R&B artist, known for her moody, soulful and hypnotic soundscapes. Reflecting feelings of heartbreak and melancholy, the songwriter touches on how growth is often painful but beautiful. With a unique Persian and Dutch upbringing, KIANA grew up in constant change. This experience taught her the beauty in letting go and adapting and as a result her lyricism developed into a form of observation of her ever-changing environment. Her music takes its inspiration from both Toronto and European music culture, creating something which is comforting and familiar, yet distinctly her own.

Her new single "chaos" is a moment of realization for the artist. After years of blaming herself for certain situations, she recognizes that self-criticism in situations beyond her control has been a coping mechanism to address questions that she couldn't get answers to. She shares, "In relationships and especially when we're in love, we're so quick to blame ourselves for any pain experienced because we are our biggest critics. It's important to step outside that narrative because it's not healthy and it's self damaging, especially when you honestly know you weren't the only cause of the effect."

The slow-paced, intimate R&B tracks shimmers with sensual melodies and feathery vocals featuring two different sides to the song. "Side A'' is filled with more energy and emotions of frustration, while "Side B" is less focused on the relationship and reflects more on the songwriter's personal experiences. She explains, "The way I view it, during moments of conflict or when you get your heart broken, you become defensive in order to protect yourself, and your emotions are extremely heightened. This represents Side A. And after time passes, the way you once felt begins to change and you bring it back to yourself. You acknowledge what you're willing to accept, the type of lover you are, and that you're not always to blame for damage caused. This represents Side B." As the song slowly concludes, the repeated lyric "I'm not to blame for the chaos we made" is what represents the closure you give yourself after the hurt and the self-reflection passes. Encouraging others to make peace with the unsorted chaos, KIANA shows that sometimes there aren't always answers or solutions.

Her music has gained recognition from multiple radio stations including Toronto's Flow 93.5 FM and Vibe 105.5 FM and received immense positive reception from her hometown. KIANA has earned over half a million plays globally and has been featured in publications such as Teen Vogue, Lyrical Lemonade, Ones to Watch, Earmilk and Red Bull Music, to name a few, as well as extensive DSP playlist support. She has touched major stages like The Mod Club Theatre and performed at significant Canadian festivals including NXNE and Canadian Music Week.