Sydney-born, now UK-based songstress Mali-Koa returns with her glorious new single "Revolution", the latest to be lifted from her upcoming debut album.

"Revolution" is further marked by a politically-charged music video which powerfully documents moments from vital social movements to highlight and keep conversations going around gender, race, human rights and climate change - something Mali has been passionate about throughout her career, regularly holding live streams to her 500K+ Instagram followers with socio-political charities to raise awareness of social and political issues.

Mali's fan base comes from a wide range of backgrounds, and so the music video is intended to show them what's been going on in the world in the hopes of keeping them informed, educated and inspired to speak up about injustice to help create social change – to the point where hundreds of Mali's fans from all around the world submitted their own messages of hope to create an alternate fan video.

Sharing her thoughts on the song, Mali-Koa reveals: "Revolution is your most powerful self in your most vulnerable moments. It's the choice to be an active participant in the life you want to live. It's about the change you want to see in the world. It's self-belief and a belief in the power of others to do good. It's the moment you choose a path and commit to moving forward. It's when you make decisions out of love and not fear. Revolution is radical and it is equal. Revolution is the greatness in our everyday experience of life and what it means to be human."

Forging her path this year as a multi-faceted artist at the brink of breaking through into mainstream consciousness, Mali has seen critical attention for her music pour in from a plethora of tastemakers including NOTION, THE GUARDIAN AUS, REFINERY29, CLASH, 1883 MAGAZINE, PAUSE HER, SPINDLE, TONE DEAF, EUPHORIA, ATWOOD MAGAZINE and VICE's NO BASIC GIRLS ALLOWED alongside a cover shoot for HEART EYES MAGAZINE; "Revolution" in particular winning over heavyweight industry names like Elton John, Trevor Nelson and Laura Whitmore as well as exclusively performing the song for her debut Mahogany Session.

After spending the past year writing and recording with renowned producers in the studio, Mali-Koa is now gearing up for the release of her debut album, out later this year. With her sonically refreshing talent, this project will exceed her fans' expectations.

Mali-Koa : I'd love to say sexy and edgy, but it's not. It's the type you'd feel comfortable showing your family and friends.


Question: Can you tell us about Revolution?

Mali-Koa : Revolution is your most powerful self in your most vulnerable moments. It's the choice to be an active participant in the life you want to live. It's about the change you want to see in the world. It's self-belief and a belief in the power of others to do good.

Mali-Koa : I wanted the song to reflect the times. I was learning a lot myself about the history of inequalities across social, gender and environmental injustice. It felt right to try and give the music video a bit of a message highlighting those social causes I cared about and had been engaging in across my platforms.

Mali-Koa : There's always a song to face even the darkest days with, you just gotta find what inspires you to keep going. 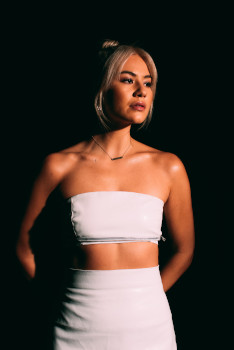 Question: How has the UK influenced your music?

Mali-Koa : It changed my life as a songwriter moving to the UK, I found peace with being a beginner and learned the hard way. It's been tough, but I'm surrounded by people who push me to work towards a bigger dream. I'm lucky in that way!

Mali-Koa : Happy on a stage or in a vocal booth. They're so rewarding in different ways. Definitely both different to singing at the RSL in a covers bands like I used to.

Mali-Koa : I'm motivated by storytelling and expressing the world as I see it. My dream is to write songs for as long as possible, for me or others. That keeps me motivated.

Mali-Koa : 2000's female led power pop, Robyn, Gossip, Florence is being re-hashed for me at the moment.

Mali-Koa : It's just like any other industry, except I sit and write songs instead of work behind a desk or a phone. I fell into it because I wanted to be creative in that way.

Mali-Koa : I think the music industry can work for you or against you, depending on what you wanna do. I work best with my head down and focused on writing the best songs I can. Try not to get swept up in the bravado.

Mali-Koa : I'd say it's the only industry where you put near strangers in a room to bare their souls and exploit their trauma and experience in the search for creative gold. Sometimes it works actually.

Mali-Koa : I've been able to work with people I admire as an artist and a songwriter, I'm yet to embarrass myself but put me in a room with Sia or Chris Martin and watch me tread water.

Mali-Koa : I've started the year with a few collaborations I'm proud of! I had a song out called "Higher Than Before" with Flawes, and have been working on a side project in the dance world called AR/CO releasing our first feature single with Will Clarke and Jaded called "Run Run". I'm enjoying writing songs and look forward to seeing my album Hunger continue to grow and be out in the world!