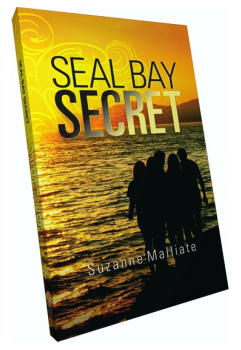 Mitch Adams and his mate Chad both really like Samantha but she doesn't seem interested. Jessica and Kieran find they have more in common than they first thought and the weird guy Luke doesn't fit in at all. But all of this pales into insignificance on the day of the school excursion when everything changes.

What was that weird light they had seen? What did it want with them? Would they ever be normal again? Every kid wants to have special powers but maybe it's not all it's cracked up to be...

Seal Bay Secret is an exciting adventure story that explores the author's interest and knowledge of the spiritual world, encouraging readers to allow their own innate intuition to guide their lives.

Suzanne Malliate's passion for writing became particularly strong during a five year experience of Chronic Fatigue Syndrome. With little physical tolerance for exercise or regular work of any kind, Suzanne discovered that writing was something that she could do at her own pace and was, in fact, instrumental in returning her to health. By immersing herself in the creation process Suzanne discovered a way to keep optimistic and passionate, despite the frustrations of her illness.

Now fully recovered, Suzanne is training as an energy healer and writing part time. Through developing her intuitive abilities as part of her healing studies and practice, Suzanne has become highly attuned to subtle energies and the wonders of the unseen aspects of everyday life. Seal Bay Secret is her first novel and she is currently working on the next story in the series.

Question: What originally inspired you to write Seal Bay Secret?

Suzanne Malliate: I love to write, ideas come to me and I need to write them out. While on holiday at beautiful East's Beach in Kiama with our teenage sons and their friends, watching them body board in the surf and interacting, the image of some teenage characters who live in a place a little like Kiama began to form in my mind. Once the characters developed more fully, the idea of creating an extraordinary experience that they share which gives them extra-sensory powers that they use to help others and in the process discover their own strength, courage and inner wisdom took shape.


Question: Can you talk a little bit about creating the character of Mitch Adams?

Suzanne Malliate: Mitch is an individual. I wanted a strong character who was very comfortable in himself; who has a style that is uniquely his own. To be honest, the character Mitch was inspired by my son Marc who is known for his interesting hair colours and styles - as his High School Principal could confirm! Marc used his hair and clothes to express his personality and that is how I wanted the character Mitch to be - creative, confident and happy in his own skin. Mitch is also a good contrast to the character of Luke who despises himself and uses his appearance to mask his real self.


Question: What struggles did you face with Chronic Fatigue Syndrome whilst writing Seal Bay Secret?

Suzanne Malliate: Chronic Fatigue Syndrome is a condition that does permit much in the way of activity or physical exercise. At times I would experience extreme fatigue and muscle pain - my body became a lump of lead and there was nothing to do but lie in bed and wait for this phase to pass, which can take hours, days or longer. I discovered that writing allowed me to escape the limits of CFS. I would immerse myself in the lives of my characters as the story unfolded and I felt like I was going on adventures alongside them - even if I was actually propped up in bed - unable to walk more that a few metres before needing to rest. Even when I needed to totally block out all stimuli - light, sound and people - I could escape to Seal Bay and create in my mind through my characters. Writing kept me feeling positive and inspired.


Question: How does Seal Bay Secret explore your interest in the spiritual world?

Suzanne Malliate: By creating an extraordinary experience that the five friends share which leaves them with extra-sensory powers, I was able to exaggerate and expand on my interest and belief in the intuitive sense and inner wisdom that we all have. We intuit a great deal in our every day encounters - by allowing my characters to hear thoughts and move objects just by intending it, they were given insights and understandings that they might not otherwise pick up on. This then gives them the opportunity to help their friends and to become empowered themselves in the process. They also become curious of the unseen world around them.


Question: Can you talk about the next story in this series that you are currently working on?

Suzanne Malliate: The next story is set back in Seal Bay with the five friends - Mitch, Samantha, Chad, Jessica and Luke. The summer holidays are drawing to a close and the friends have lots of news to catch up on as they arrive back from trips away. Their reunion is interrupted by the discovery of a school friend lying unconscious in the park. Is he ill, drunk, drugged or something else? Once again the five friends find themselves drawn into a situation that they need to sort out for themselves as it soon becomes clear that this is no ordinary case of partying too hard; they will need their powers, all their wits and an open mind to unravel this mystery...

Seal Bay Secret is available at all good bookstores, online at www.shortstoppress.com or as an e-book through the Amazon website.