The Adventures of Nanny Piggins 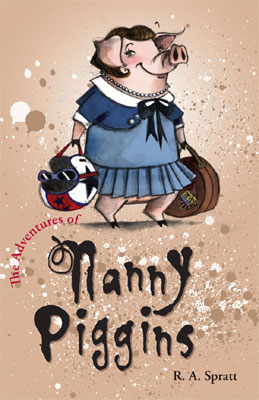 The Adventures of Nanny Piggins

'I charge ten cents an hour,' Nanny Piggins declared boldy.
'You're hired!' exclaimed Mr Green without even thinking. He knew a bargain when he heard one. 'I'll be frank, Nanny Piggins, I would prefer not to have a pig take care of my children. But I am prepared to offer you the job until a suitable human nanny presents herself.'
'Very well,' said Nanny Piggins, 'I think you will find human nannies are terribly orated. They are, in my experience, very greedy and not terribly clean. But I shall agree to your terms. Because it is wet outside and I do not have an umbrella.'

Nanny Piggins, the world's most glamorous flying pig, runs away from the circus and goes to live with the Greens as their nanny. The Green children, Derrick, Samantha and Michael, fall in love with her instantly. Who could not fall in love with a nanny whose only job qualifications are her astonishing ability to be fired out of a cannon and her amazing ability to make chocolate cake, sometimes both at the same time?

They have some wonderful adventures together. I won't spoil them for you by listening them all but they do include catching a serial doorknob thief, hiding a 10-foot dancing bear in the basement and being lost at sea en route to China.

The Adventures of Nanny Piggins is a hold-your-sides hilarious new series for 9+ girls and boys. R.A.Spratt, a comedy writer who has much experience working for children's animation and TV series, has created an irreverent and adventurous chocoholic pigs nanny who will capture the imagination of children and adults everywhere. Already sold to the U.S market, The Adventures of Nanny Piggins is set to be a surprise success for Random House Australia this year!

Rachel Spratt is an award-winning comedy writer with ten years' experience in the television industry. She has written comedy, pre-school drama and children's animation. Rachel lives in Sydney loves cappuccino-flavoured chocolate and hates Telstra. The Adventures of Nanny Piggins is her first book.