The Buckleys Oops I Love You 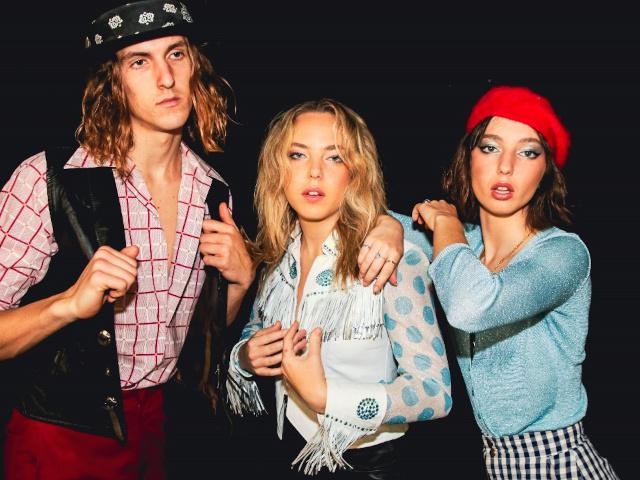 Coming off of the release of their critically acclaimed debut album Daydream, Australian pop-country trio THE BUCKLEYS have returned with a brand-new single "Oops I Love You" via Petrol Records/Universal Records/UMe. Recorded at Nashville's iconic East Iris Studios earlier this Spring, "Oops I Love You" finds the chart-topping band in a fun-loving, joyous playful mood.

"Interestingly, this song started out on bass," says vocalist Sarah Buckley, oldest sibling to the Buckley family trio which includes Lachlan (guitars) and Molly (keyboards). "I was jamming with our youngest brother Dylan (15 yo) on drums just for fun and I started playing this bassline which you hear in the song. We kept jamming and when I brought it to Lachlan and Molly as just a bass and drum groove, they loved the direction, so we all started playing around with some ideas and the melodies started to take form."

Traveling from their native Byron Bay, Australia to Nashville earlier this year to write and record the upcoming EP TAKE IT AS IT COMES (release date: August 5, 2022) with producer Chad Carlson (Trisha Yearwood, Taylor Swift, Lady A), Sarah pulled out the basics of the song and revisited it in the studio.  "We kept it in our back pocket to show to our producer Chad where we were going. We were in the studio, and I started singing 'Oops I love you' as the chorus and everyone picked up on it and I guess we ran with it!"

A breezy pop confection that pushes the band forward from their "Hippy Country" roots that put them on the map with their chart-topping debut album Daydream, "Oops I Love You" is further proof of their command of up-tempo, feelgood beats and melodies. "What has been so great about this new project is that we've spent a lot of time writing together, just the three of us, and have been able to define where we want to go and want to say," Sarah explains about the creative process. "Bringing our vision and ideas to some of our brilliant creative friends and collaborators in Nashville has given this new project a whole new grit. Walking into the studio with a cohesive vision between us is so important and being able to take that to a whole new level through collaboration is something special."

Proceeding to tackle the U.S. market, The Buckleys' Stateside highlights include a performance on The ACM Weekly and add on Radio Disney Country with their single "I'm Comin' For Ya (Love)," and a CMT Music USA add for their video "Breathe." The band created a groundswell in Australia with each of their four released singles charting in the Top Five of Australian country radio. Their first single "Daydream," catapulted the trio into the limelight, scoring a #1 single on Australian country radio, which was followed by the second single, "I'm Comin' For Ya (Love)," which reached #3. Their worldwide debut single "Money" reached #2 and its follow up "Breathe" at #3.

Having been away from actual touring since the start of the pandemic, The Buckleys are hoping that the release of this single and EP will herald a new beginning of exciting new music and future live performances, especially in America.  "It feels like a natural evolution from where we left things off with Daydream in 2020," Molly says excitedly, hopeful that touring can be a large part of their gameplan.  Adds Lachlan, "We've all grown a lot as individuals, songwriters, musicians and together as a band since recording our debut album. We are experiencing a new chapter in our lives, which you hear in the music." Optimistic and hopeful, Sarah concludes, "We really want to get out on the road, play as much as we can, meet as many people as we can and soak in all the experiences."