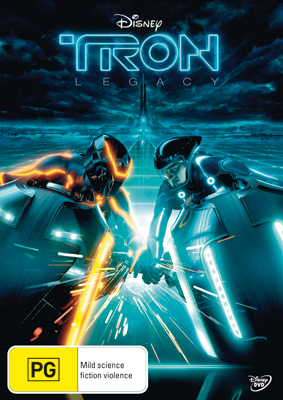 Sure to light-up fans, TRON: Legacy provides consumers with the ultimate Hi-Def Blu-ray experience with breathtaking 1080p visuals and superior 7.1 surround sounds that bring to life the visually stunning world of TRON. Taking you further behind the grid are also in-depth bonus features on the making of the film (i.e., creating the futuristic vehicles and world of TRON, storyline mythologies, actors/characters and more) and the all-new Disney Second Screen interactive experience.

State-of-the-art technology brings this father-son story to life, as the rebellious 27 year old Sam Flynn (Garrett Hedlund) is haunted by the mysterious disappearance of his father, Kevin Flynn (Oscar® and Golden Globe® winner Jeff Bridges), who was once recognised as the world's most innovative tech visionary.

When Sam investigates a strange signal sent from the old Flynn's Arcade - a signal that could only come from his father - he finds himself pulled into a digital Grid - A place of infinite possibility - and where Kevin has been trapped for the last 20 years.

With the help of fearless warrior Quorra (Olivia Wilde), father and son embark on a life-or-death journey across a visually stunning digital landscape created by Kevin himself that has become far more advanced. Complete with never before imagined vehicles, weapons, landscapes and a ruthless villain who will stop at nothing to prevent their escape, TRON: Legacy even features a soundtrack spun by Grammy® Award-wining electronic music dup, Daft Punk.