Soundtracking the youthful nights spent under the stars with a cinematic pop edge that feels like it belongs in a coming of age Netflix film, TRYHARD has been introducing himself to listeners through an empowering self-discovery lens. His debut single 'Dopamine' and follow-up track 'Matches' captured a raw energy that signalled the beginning of a deeply introspective journey. His first release of 2021, 'TOO REAL' (out now), continues that exploration as he identifies his own toxicity surrounding an "almost relationship".

"All my songs are written from personal experience. 'TOO REAL' was inspired by an almost relationship I was in. Writing it was really cathartic because it allowed me to reflect on all the things I endured to keep that person in my life. This was definitely one of the easiest songs I've written and probably took me no more than 15 minutes" he explains.

Touching on the different complexities of mental health, he honestly admits "I'm so overwhelmed right now" during the opening moments of the song which perfectly sets the tone for the rest of the 3 minute duration. Contrasting emotional self-reflection with a shiny pop production, he uses his personal PC-pop inspirations of Charli XCX and Kim Petras to unlock a playful side to a song where you might not necessarily expect it. Produced by Gustav Nilsson and Mastered by Paul Blakey, they help bring his vision to life and deliver his most polished pop moment yet.

"This song feels like a level-up for me as an artist. We're getting into real pop territory now, and my music is starting to sound just how I dreamed it would growing up. I'm feeling more comfortable and more myself than I ever have before".

TRYHARD is ironically the polar opposite of his name. With his music embodying a natural authenticity, there is a genuine ease that echoes through his songwriting and vocal delivery. Creating pop music that whole heartedly tells his story with a glittery pop filter brushed over the top, you do feel like you're getting to know him, and the vulnerable secrets we like to share in the dark, more candidly with every release.

The moniker TRYHARD is the bold musical project from 23-year-old Melbourne singer-songwriter James Comito who's whole project revolves around the exploration of the confusing coming of age experience. Projecting that through a very confident and colourful light, he taps the likes of Taylor Swift, Troye Sivan and Conan Gray as some of his biggest musical inspirations within finding his voice as an artist.

Stepping away from his behind the scenes work of songwriting and collaborating with fellow rising stars Muki, Oh Boy and Chris Watts, he's stepped into the spotlight with his introductory singles that are a true testament to the collaborative work he's been honing. With 'TOO REAL' only being his third release, he promises to make 2021 a year where you get acquainted with him intimately as he unravels the different complexities to his artistry.

TRYHARD: I describe my music as "pop with a drop" – essentially, pop infused with modern EDM and electronic elements (in the vein of producers like Zedd, Grey and Gryffin).


Question: Can you tell us about Too Real?

TRYHARD: I wrote TOO REAL in the aftermath of a really toxic situation. You might interpret it as me slamming the breaks on my tendency to romanticise people and situations. Sonically, it's a level-up from the indie-pop style singles I released last year. I feel more in my element here – we're verging into real commercial pop territory now.


Question: What is the story behind TRYHARD?

TRYHARD: TRYHARD was born from people trying to pigeonhole me as a songwriter. I got my start in the industry writing for other artists in my late teens. I love writing for others, but that soon became my sole purpose. This meant anything I wrote by myself was inevitably going to be shelved. I hated that. I needed a way to give life to songs of mine that would otherwise never have been heard and so, TRYHARD was born. 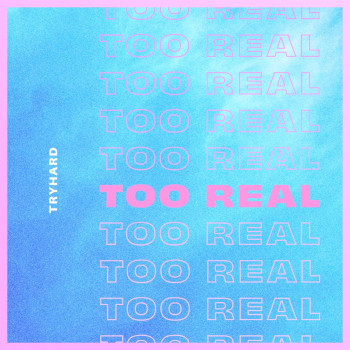 TRYHARD: I'm really passionate about mental health advocacy. There's still a lot of stigma around asking for help when you need it. Men, in particular, have a tendency to internalise their feelings for fear of how others might perceive them. This is an attitude we really need to change. By talking about my own experiences, I hope to help normalise more open conversations around mental health and remind people that it's okay not to be okay.

TRYHARD: I have so many little goals that I have written down. I guess, in general, I just want to be known as a great songwriter. Every time I write a song, I try to envision how that idea fits into my overall body of work. My music needs to be sonically cohesive – something I can look back on in 20 years' time and be proud of. Most importantly, I just want to make my friends and family proud. They've watched me work at this ever since I was a kid.

TRYHARD: I'm currently obsessed with Olivia Rodrigo's album SOUR. She's an incredible writer and all-round angel of a human being. I've been hooked on everything she's released so fa

TRYHARD: I learnt to play the piano by listening to Fearless by Taylor Swift, learning the chords to each song so I could play along. Taylor was a huge inspiration for me growing up. Her song "All Too Well" remains my favourite track of all time. She also pioneered songwriting as a substitute for diary writing which has been my go-to coping mechanism ever since lol.

TRYHARD: If we're talking Aussie artists, it would have to be either Kota Banks or CXLOE. Producer-wise, I would love to collaborate with NOTD or Grey.


Question: Did you have any pre-conceived ideas about the music industry? TRYHARD: I got my first taste of the music industry when I was a teenager, so I had to more or less learn everything on my feet. As more and more people are becoming aware, the Australian music industry has a dark underbelly of sexual harassment, abuse and predatory behaviour. There are a lot of really inspiring people currently fighting to change this culture.


Question: What has been your favourite part of becoming a music artist so far?

TRYHARD: I love receiving messages from people saying they heard my song somewhere or that somebody played my song at a party. It literally makes my day every time. I have a lot of fun making these tracks, so it's super cool to hear people enjoy listening to them.

TRYHARD: I wake up, make myself a coffee (strong latte, no sugar) and then, depending what day it is, either dive into uni lectures or a writing session. I set myself a goal of writing at least 3 songs a week. My favourite day of the week is definitely New Music Friday. I'm notorious for spending all day trawling through the new releases of the week and spamming my mates with song recommendations lol.

TRYHARD: So much! I don't even know where to start. Finishing my EP, playing a few shows and maybe even a collaboration (or two). For now, I'm just excited for everyone to hear TOO REAL!