For Uma, Life is More Than Just a pay Check. 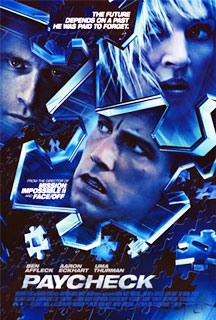 Uma Thurman appeared in a good morning while in town promoting her latest film, Paycheck. While clearly reticent to discuss her recent separation from husband Ethan Hawke, the glamorous star says that like her Paycheck co-star Ben Affleck, the best way to handle the media's obsession with an actor's private life is to, well, ignore it. "I think the best way to handle it is to wish everybody well. It's like I've gotten so much out of my career, and my life, who said there's going to be no cost? What's free," says Thurman. "What, you should get to do what you love to do, is live a great life, travel, experience new things, and blow your own mind and what? You should be thanked for it? It's given me so much, so sure sometimes it's difficult, but I feel that attitude helps me deal with it better than any other attitude."

Paycheck, directed by action aficionado John Woo, is a futuristic thriller in which Ben Affleck plays an electrician who has had part of his memory erased, and struggles to find clues to his whereabouts for the past three years. Turns out his employer did the evil deed as a security measure, leaving him only with a collection of random objects to help him reconstruct his past, which includes an enigmatic biologist [Thurman]. One of the more compelling aspects of the film is the ability for a machine to predict the future. Thurman believes that the future should remain a mystery. "I think life is intense enough as it unfolds, so I quite like getting to have one day at a time myself. I wouldn't mind a few clues, if anyone had any great insight or advice for me, but a lot of that is intuitive."

She is far more pragmatic, however, when it comes to equating that philosophy with her own career. Everybody always tries to look into the future of their career. "We do struggle to want to bring you good movies, so you look at the script and you look at the director, you look at yourself, you'll look at anything, you'll read any tealeaf to try to find a way to deliver and make your effort not be in vain." She might have been tempted to peek ahead to see whether she should have chosen a particular film, but would she have changed anything? That's an entirely different proposition. "The temptation of course is to think yes, but really the way I look at it is that it's the situations that worked out well; deliver you one thing, and the situations that didn't, teach you something really crucial. They are a fabric, every single director that ever believed in me, has ever given me a chance, every studio head, whatever the process of decisions are, each one of those people are giving me a pearl for my chain, and sometimes a pearl has a big black eye. Sometimes maybe it was one that was a different kind of lesson, but you can't really unstring your life and just pick the good moments, because you wouldn't be who you are. It would be much less rich."

These days, however, Thurman is on a career roll, what with the Kill Bill movies and now another action flick. She was drawn to Paycheck, she says, because of its director, John Woo, plain and simple, "because I think his filmmaking style is masterful, and he's one of those directors that you talk about his movies as cinema, and win, lose or draw, you can take a movie of his that maybe someone didn't like and you sit and you watch it; that kind of filmmaking is breathtaking to me. I've spent my whole life watching filmmakers' work, and it's passion, so I like to be in that kind of hand; I like to see and watch it. It feels really good."

For Thurman, doing this movie she says was more fun having done Kill Bill, "because I got to play the girl, and had a really nice time. Ben did all the heavy lifting, I got to watch John Woo work, see Ben hit people and wasn't covered in blood. John Woo had been a big inspiration to Quentin, and way back when we started to develop the idea, the first film he took me to, he said, 'You want to see something? I'll take you to something.' He actually got a print and hired a screening room, before the days when he had a screening room which he likes to brag about, sat down and showed me The Killer and talked me through this moment and that moment. That's why I have long hair, because he wouldn't let me mess with my hair in Kill Bill, since he loved the way in The Killer, the woman's hair would fly in slow-mo. He was like, 'You're not going to take that hair from me.' So, in a way, the intense gauntlet of work and a lifetime struggle and defining moment of work that Kill Bill was, when John Woo called me it was sort of like - it just seemed sort of like it was kind of meant to be. It seemed like I probably wasn't in good enough condition to carry a movie in that moment, but to go work with him it was almost like a heal. It was like, 'Let me go see that, let me see how he does it.' And that's why it was fun."

Not that she's not overjoyed about Kill Bill, a film she still talks about with enthused passion, "surfing the universe with a director like Quentin, with free-style creativity like his, to get to see someone be able to work in film so creatively and so freely and have the courage of their own convictions and do what they like, is not something you see everyday. Nor do you see it much in the world, as not many people get to do what they like, so I kind of like to applaud somebody who has the courage to do that. I think it came out great as it's a rough piece of material in its own intense way and it's not your everyday thing, and those kinds of extraordinary things, those odd things, those unusual things, the things that might break ground in ways, are really risky."

Thurman pauses when asked whether anything in her career has helped her in her everyday life, admitting that it has, "because it's a complete dance in your own development as a performer, in terms of what you are sharing of yourself, the demands of a new part and what it makes you dig in and find in those breakthrough moments where you do something that you didn't think was possible. It's a completely alive relationship. I can say about this last year that I never really was a physically self-confident person. I was much more comfortable in a scene seated at a chair. I felt awkward. Forget it, I could slip into a part like June Miller and become this swaying kind of other person, but it wasn't really natural to me, I'd have to create it for a character. And what the Master Woo-ping did for me, I was their Lindsay Wagner. I showed up, I was a mess and they basically opened her up and reconnected all those wires that nobody ever got right in the first place. They taught me to be coordinated, it was really, really hard work, I didn't know if I'd get there, but I couldn't believe what they helped me do and that sits in my body now in a whole different way, and as a woman that's like someone gave me something huge, someone made me feel strong, someone helped me make myself I guess I should say. They changed me. They showed me something. It's really amazing," she says with genuine enthusiasm.

Looking at the 33-year old actress, it's hard to imagine that Thurman has made some 30 films, beginning at age 18, after an early modelling career. Thurman jokes now that her "mid-life crisis started at thirty, because that was my mid-life, having been professional for half that time." Part of that crisis of sorts meant reflecting on an unsure future, considering giving it all away, especially following the birth of her daughter. "I was like: how am I going to do this? This is a huge responsibility for me. I can't be like I was there and do this - I felt completely changed. So it took me a long time to reassemble myself as a woman and feel like I'm still a woman, I'm still an actress, I'm still vital like that and I am this." She admits finding it tough to balance a professional and personal life as both mother and movie star. "It's been the reason I haven't really felt entitled to work freely. Before you just work because you love to work, and because you need to get out of the house, or you work because you need to live and you live inside your work in a way that you don't live anywhere else. And then everything changes and you feel much more conflicted, and I think I really struggled with that conflict, because I was like, what's good enough for me to - what's worthy enough to interrupt this day or this life here? Or take this kid on the road? Then you start looking at everything with this insane amount of scrutiny and you're just conflicted. It just put a lot of pressure on those decisions I couldn't make. I was making decisions through a very complicated screen. So I just try to balance it, over think things and try to do the right thing; I just do my best, as any working mother will tell you."