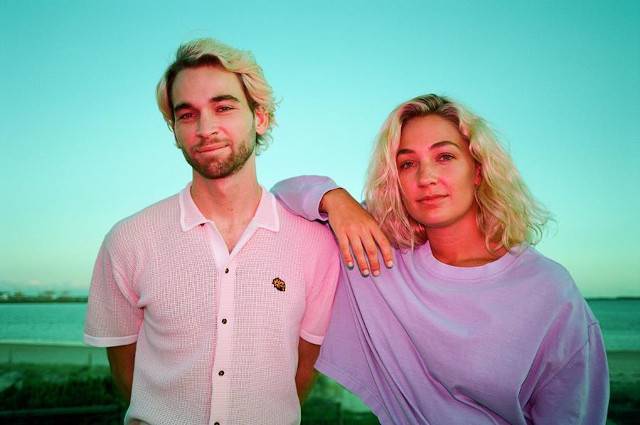 YUMA X –comprised of vocalist Lucy Washington and producer Jake Smith – want to write music that makes you feel good, more than anything else. And the timing couldn't be anything but perfect.

Premiering the track on triple j's Good Nights, 'Secret Lover' is a taste of what to expect in the year to come.

Written alongside Pawws – the alias for UK songwriter and musician Lucy Taylor (Dua Lipa, Friendly Fires), 'Secret Lover' channels a heavier influence in club-adjacent sounds while not drifting far from the comforting warmth that defined their earliest work.

Jake says "I remember the song had a very 80s feel to it on the day, and it had this fun, anthemic sing-along energy about it.The song has changed a bit since then, but I always remember that feeling even when I hear the song as it is now."

Arriving alongside a video clip directed by Maddy King, 'Secret Lover' was filmed in Sydney and surrounding countryside.

Maddy says, "Filming the Secret Lover music video was one of the most rewarding artistic experiences I've been a part of!
From the very beginning it was super collaborative. I cast Lukas (Radovich) early in the process, and he came over to my apartment and we sat down and wrote the script together. We shot the studio scenes the day after the Mardi Gras parade which felt really perfect, the energy on set was magical. The following weekend, we stayed at a tiny Airbnb in the countryside to film the rest of the video. The cast and crew were all together in the tiny tin shack, which was amazing, we felt like a tight knit family.
I am so grateful to bring the project to life. My hope is that whoever watches this will feel less alone and more free to be themselves "

Yuma X have now garnered over 6 million global streams of their music which includes singles 'What You Want' 'Chasing Patterns', 'Swimming Pool', 'Matchstick' and their debut EP Home Recordings. They have supported acts such as G Flip, Boo Seeka, RÜFÜS and ODESZA and curated the All Our Friends live night. Championed by tastemakers such as triple j, FBi Radio, Radio Adelaide, Pilerats, Fashion Journal, Backyard Opera, and local and international playlists, Yuma X have spent years finding their strengths, learning how to showcase them at their confident best. Singles like 'Secret Lover' prove that Yuma X are ready to shine once again.