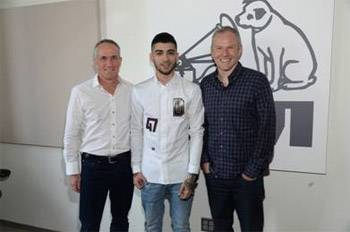 RCA Records and Syco Music have announced that Zayn Malik will release his debut solo album on RCA Records.

Simon Cowell of Syco Music says: 'With RCA, Zayn has the perfect label to work with on his solo career. They are excited about working with him and I am sure whatever they release together will be special."

Comments Peter Edge and Tom Corson of RCA: 'Zayn's a genius songwriter with an incredible voice, and we are proud to have him join our roster of iconic superstars. We are thrilled he has entrusted us to deliver his personal artistic vision to millions of his fans across the globe."

In March of this year, Zayn announced his departure from One Direction, currently the world's most successful group, having sold more than 54 million albums worldwide.

Syco Entertainment is a joint venture between Simon Cowell and Sony Music and is one of the world's leading global music, film and television production companies responsible for some of the world's most successful global TV and music franchises. Syco Entertainment is also the world's most successful producer of international talent with Syco Music being named the UK's number 1 record label for both A&R and sales in 2014 and is record label home for such diverse international recording artists as Labrinth, One Direction, Susan Boyle, Little Mix, IL Divo, Fifth Harmony, Alex & Sierra and Ella Henderson. Syco's television assets include the global franchises The X Factor and Got Talent. Local versions of The X Factor are produced in more than 56 territories, with artists discovered by the format selling more than 180 million records worldwide, including 200 number ones and 380 top 10 records. The Got Talent format is officially the world's most successful reality TV format of all time, holding the Guinness World Records title for the 'Most successful TV format of all time" having been commissioned in an impressive 68 territories worldwide. America's Got Talent also airs in 186 countries around the globe and has been the #1 US summer reality series for the pass decade. Syco Film produced the 2013 #1 global box office hit " One Direction: This Is Us" a 3D concert movie with Sony Pictures and have recently partnered with Animal Logic (The Lego Movie, Happy Feet) to produce a number of music-based live action-hybrid animated movies.