HATHAWAY TAKES ON HER TOUGHEST ROLE YET.

One of Hollywood's most sought after actresses, beautiful and confident Anne Hathaway says she was finally ready to take on tye tough role of a drug-addicted sister who returns home from rehab to spend the weekend with her sister, Rachel, and the rest of her dysfunctional family in Rachel Getting Married. Last seen in the bigger Hollywood film Get Smart, Hathaway talked exclusively to Paul Fischer.


QUESTION: I take it that when this was presented to you, it was a no-brainer, taking the film.

ANNE HATHAWAY: Yeah. It really was. And after I met Jonathan Demme - I felt like at the point when I met Jonathan, I wasn't the person I wanted to become. But in that meeting, in that hour that we spoke, I was much closer to the person that I'd like to be than I had ever been, talking to anyone else. And so I feel like knowing him and working with him, I had this - in addition to having this amazing artistic experience, I just have undergone this process of self-discovery that I wasn't counting on, that has been so extraordinary.

ANNE HATHAWAY: I don't think I could have played this performance - given this performance and played this character, before the point that it actually came to me, and it actually happened. Definitely. But I just think I was basically focused on the idea of who I wanted to be, as opposed to who I actually am. And with Jonathan, he's such a genuine person, that he inspires everyone to be their most genuine selves around him. And he's - and that felt really good. So I decided to keep doing that.


QUESTION: I mean, acting is all about - you know, role-playing, and it's all about the use of the imagination, and all those kinds of things. What kinds of - what do you tap into to play a character like this? It's obviously very different from doing - you know, obviously, a Get Smart, or any of these other big movies that you've done.

ANNE HATHAWAY: Well, I mean, without taking anything away from those characters, which have their own complexities, Kim is the most complex, grown-up character I've ever played. You know, she's got a lot of life packed into her 25 years, and a lot of the characters that I've played are just starting off on their journeys. And Kim is very, very, very well-along on hers. So what do I tap into? I don't know. My imagination, my experiences, my observations, same as any actor. 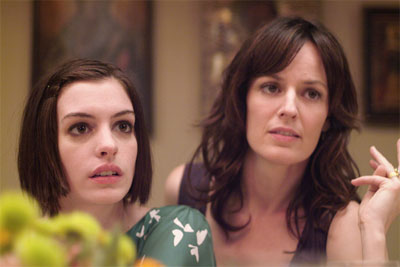 QUESTION: Do you talk to a lot of addicts?

ANNE HATHAWAY: Yeah. I mean, I know my fair share, so it was really cool to actually - well, I do. I mean, everybody does, really and we talked about it. And so I was able to have really open and intimate conversations with people who trusted me, and who I trusted very much.


QUESTION: How draining was it doing this because I can imagine that there are some scenes in this that I gather would have been very, very difficult to do.

ANNE HATHAWAY: Funny enough, it wasn't as draining as other movies that I've worked on, just because the way we shot it, you never had to stay in any place for too long. And you never had to - you know, you were never on a scene long enough for the material to become tired or stale or to lose its meaning, or to lose its pull, or to lose the weight behind it. So if anything, it was actually, in some ways, the easiest job I've ever had.

ANNE HATHAWAY: Also, I had a year to prepare for the character, so I kind of, by that point, knew what I wanted to do with her, and why. And I'd done all my homework, and I felt really prepared.


QUESTION: Could you identify with her? Was it an easy character to relate to on a personal level?

ANNE HATHAWAY: I think so. I mean in some ways, I've never had - the stakes in my life have never been as high as hers have been, in terms of needing to survive by telling the truth. And it's funny, because most characters in movies survive by telling lies and feeling guilty about it. Kim tells the truth, and everyone hates her for it. So - but the idea of fighting for your family, I could definitely relate to that. I love my family ferociously, and would not ever put up with being excluded under any circumstances, as Kim doesn't, but I've, luckily enough, never had to prove that.


QUESTION: Is it your family that keeps your grounded, and gives you a reality check every now and then?

ANNE HATHAWAY: Definitely. I mean, I've got an amazing family, but I I do want to give myself some credit for that. I think I'm acting for all the right reasons. I don't - you know, I appreciate all the cool movie starrish stuff that happens, but I don't expect that to laugh. And I've always said from the beginning, as long as I can keep working consistently, telling good stories, I'll be happy as a clam. I don't really need much else. And I've found that that is actually quite a bit to ask for as an actor, and I've gotten that. So I don't see any reason to be any other way.


QUESTION: Why don't you expect that to last? 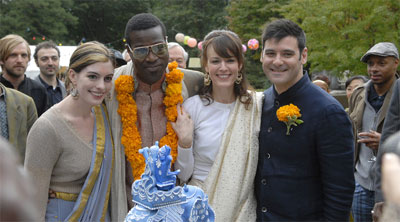 ANNE HATHAWAY: Because it never lasts. Even with the best people, there's always peaks and valleys.


QUESTION: But you could be a movie star in your 70s.

ANNE HATHAWAY: Of course. But I'm sure I won't have been consistently working with the best material out there the entire time.

ANNE HATHAWAY: Yeah. Well, nothing in my work had ever suggested that I had anything other than a happy-go-lucky, gawky girl in me.


QUESTION: Were you surprised that you got a lot of attention for that movie, and that it kind of gave a different perception of you to the casting people, and to Hollywood in general?

ANNE HATHAWAY: I mean, I was just happy to disappear into a role in a way that I'd never been able to before. I mean, as much as I felt that I had disappeared into my other roles, they were all girls around my age. So it was, I think, very difficult for people to tell what was my personality, and what was performance. And with that one, there was no question about it. So I was really happy that I just got to show that. But it's such a small part in that movie. You know, it was just very cool to be acting with such extraordinary actors of my generation, and with Ang, and to tell that story. I was so proud of it, so. yeah. I mean, there were a lot of cool parts to it. But sure, that was definitely one of them.


QUESTION: Was there always an actress in you when you were young? When you were growing up?

ANNE HATHAWAY: Oh, yeah. Oh, yeah. I spent a lot of time with my extended family this summer, and I was describing a play that I was reading, and I was kind of - looking at it. My one cousin, who's almost my same age, she just goes, "Well, you always were a drama queen, so I suppose this role's gonna work for you." And I said, "I'm not a drama queen." And she's like, "Eh, you cry a lot." [LAUGHTER]


QUESTION: When you take on something like a Get Smart, is part of that a business decision, or was it simply the idea of doing something ridiculously fun, and reliving your fantasies?

ANNE HATHAWAY: To be honest, I never have, and I hope I never do, do anything entirely because it's a business decision. And Get Smart's certainly the case of that. I wanted to work with Steve Carell. I loved the character from when I was a kid. I had never played a character like that, so I was really drawn to it as an actor. And I just thought, "Oh, cool. This is a new challenge, that's not something I've ever done before. Let's see if this one works."


QUESTION: Are you signed up for a sequel? 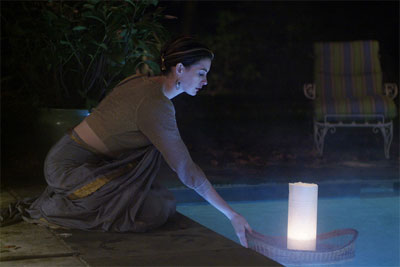 ANNE HATHAWAY: I am signed up for one, but I haven't heard whether or not we're making one next.


QUESTION: So what's next for you?

ANNE HATHAWAY: Oh, man. I have nothing but desire to do theatre. And I have for years. The last thing I did on stage was when I was 19, and I'm itching to get back.


QUESTION: Any particular part that you have any desire - should I promote something for you?

ANNE HATHAWAY: Well, there are a bunch of roles that I'm worried I'm getting too old to play, like Juliet and Nina, so I'd love to get those in before I get a little bit too long in the tooth.


QUESTION: My heart really bleeds for you profusely.

ANNE HATHAWAY: But - okay, come on. But Juliet - you know.