It's the 10th Anniversary of Gerald the dancing giraffe!

To celebrate the many years of dancing and prancing we're releasing three fantastic new formats of Giraffes Can't Dance!

In Africa, every year the animals hold the Jungle Dance. As the lions do the tango and the warthogs do the waltz, Gerald is told that giraffes can't dance. Clumsy Gerald longs to dance but the other animals mock him and he leaves feeling sad and alone. He bumps into a cricket that encourages him to listen to everything around him. The cricket plays his violin and to everyone's surprise and delight, Gerald's hoofs begin to move! All the animals come to watch because Gerald can dance!

This bestselling children's book never fails to delight, and the new formats are a great addition to any collection. Happy Birthday Gerald!

Giles Andreae was born in England and is a bestselling and the award-winning author of many children's books.

Guy Parker-Rees was born in Zimbabwe and immigrated to England when he was three. He has illustrated for Tony Mitton with titles including All Afloat on Noah's Boat and Perky Little Penguins along with Ducky Dives in and many others. 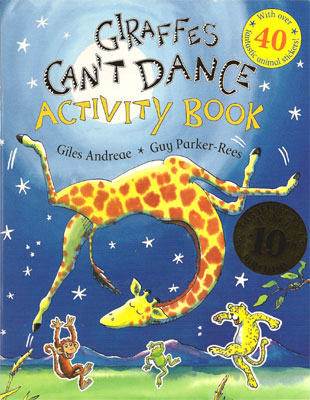