Go back in time and face the brutality of Ancient Rome, through the eyes of young boys fighting for survival.

This action-packed six book series follows young gladiator, Decimus Rex, as he fights for freedom and survival in Ancient Rome. When Decimus is kidnapped by slave-traders and taken to the Arena Primus, he must prove that he has the strength and determination to win his freedom under the watch of the evil trial-master Slavious Doom.

Decimus is forced to run over burning hot coals and face hand-to-hand combat with his fellow slaves. With the help of his friend Olu Umbika, Decimus managers to escape, only to find out that his friends are being held as bait, to lure him and Olu back to the Arena Primus. Decimus must decide whether to keep his freedom or return and make a bargain with Slavious Doom; to risk his life so that he maysave his friends.

Join Decimus as he battles his way to freedom with a free gladiator game in every book!

David Grimstone was born in Margate on 25th January 1978. As a child Grimstone loved to learn about English and History and has now found a way to combine the two in Gladiator Boy. These days, he spends much of his time exploring the many ancient and historical worlds inside his head. When he's not creating or developing the Gladiator Boy series, Grimstone enjoys visiting derelict castles and abandoned fortresses with his wife and son. His main desire however, is to see Decimus and his friends in their own feature film. 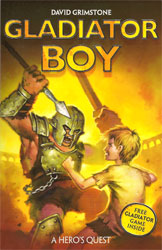 Do you dare to join Decimus Rex as he is kidnapped by slave-takers?

Would you survive the dreaded Arena of Doom?

Find out what trials the cruel overlord has in store for our hero Decimus Rex...

Do you dare to join Decimus Rex as he undergoes further trials in the dreaded Arena of Doom?

Would you survive being attacked by giants with hammers, or hold your own in hand-to-hand combat?

Find out if Decimus Rex will ever escape... 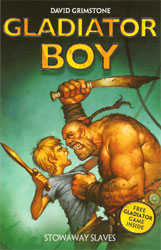 Do you dare to join Decimus Rex and his friend Olu on the run from evil Slavious Doom?

Would you survive being chased through the sewers by wild dogs and armed guards?

Find out if Decimus and Olu have got what it takes to get far away from Slavious Doom... 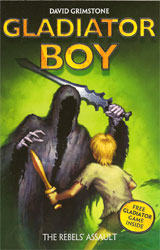 What would you do if your friends were being used to trap you to give yourself up?

Would you face overwhelming odds and try to rescue them?

Find out if Decimus and Olu have the courage to return to Slavious Doom... 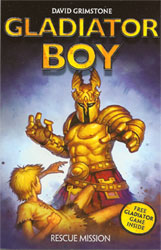 What would you do if your friends were being used as bait to get you to complete a task?

Do you dare enter the catacombs underneath the Arena of Doom and find them?

Find out if Decimus can single-handedly rescue his friends... 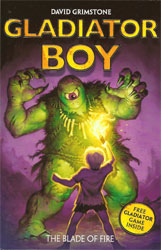 Gladiator Boy 6 - The Blade of Fire

Do you dare fight your way through the perilous maze underneath the Arena of Doom?

How will you retrieve the legendary sword from the monster in the cavern?

Find out if decimus Rex fulfils his destiny...