Bursting out of the grunge imprint of Seattle, HARLEY capitalizes on their four previous releases with their latest drop. This Pop-trio, cartels collaborations between heart-racing lyricism and emotionally breaking melodies in HYPNOS.

This song is about the unshakable entrancement of a bad break up and forces you to feel that all over again - in the best way.

"We wrote this based on the weirdest relationship I ever had. It was all so good and so fun, but I didn't know that'd be the last time we talked. It all was over in about an hour. Everything felt wasted I felt absolutely still driving home."


Question: Can you tell us about Hypnos?

Harley : HYPNOS lives in the space right after the break up, when everything is still raw and emotional like right after the shock of it. The timing when the self-doubt kicks in and you start to question everything, This song is essentially part 2 of Babe, I'm a Mess - a song we released last year written about Kimo's [drummer] most recent heartbreak. The feelings lingered so it made sense to do another track on it.

Harley : I guess the only thing I'd like listeners to take away is a sense of hope - that you're not alone. I want to give them an escape or even the chance in their brain to escape. This world is already hard enough and I want people to know that they don't have to go through it alone. All emotions are valid and deserve to be heard. HARLEY is here for that.


Question: Who writes your music?

Harley : Our frontman Cade James Carl, does a lot of the melodies and the lyrics and then we all come together with melody revisions or lyric revisions, production and final direction of the song. We all bring ideas to the table and work on them. It's definitely a team effort.

Harley : Performing. Absolutely performing. We all feel cooped up in the studio, especially during this pandemic so we cannot wait to get out and play more, but performing is only 1% of the work we put in. And to be honest, we're a little bit in love with release days as well. But on the other hand.. We definitely all agree that having people spend an hour and a half of their lives with us at a show and surrendering to our stories at that moment is an unreal feeling. 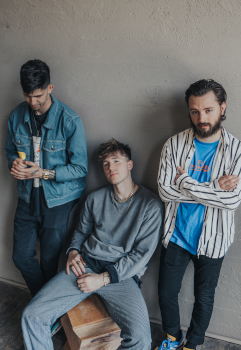 Harley : Cade James Carl [frontman]: If we could have anyone, anyone?? If I could have absolutely anyone, I'd turn back time and have Tom Petty come to a show. I look up to his melodies and lyricism a lot. He's a big part of why I write like I do. but if I can't reverse time, then Brandon Flowers of The Killers, he is also absolutely brilliant and a big influence.

Kimo [drummer]: definitely Bruno Mars. He's the greatest performer alive and if he got to see what we have to offer, who knows the opportunities that could follow.

Tristan [bass]: For sure Frank Sinatra. His main goal was always to convey emotion and genuine feeling in the way he sang and performed his songs, and I would hope that he would see that in us.

Harley : HARLEY comes from the idea that everyone has different perspectives and meanings for everything. We thought HARLEY was this elusive word that can mean different things to everyone. To some people it's the brand of their dad's bike, or their favorite vintage tee, or whatever. And I think that's what music is all about. The idea that we can sing a song for one reason, but then we can have it sung back to us for a thousand different reasons.. amazing. I'm also a fan of Harley Keiner from Boy Meets World.

Harley : I actually met Kimo (drummer) playing pick-up basketball and we started writing together. Then Kimo Combs introduced me to Tristan Woods (bass) and that solidified us as a three piece.

Harley : The biggest challenge is just making sure we're heard and constantly putting out engaging content. As an independent artist it's easy to get lost in the sea of sound and every other social media trend that exist and then making sure our meaningful content is still us and a sound that defines HARLEY. We're three different people coming together trying to evolve inside and outside ourselves musically. Gelling in that sense can be difficult as well for sure.

Harley : A normal day isn't as glamorous as it may sound. I wake up, check email and texts from the HARLEY team and continue with all the admin things required of me like interviews, meetings etc. Then I usually have a writing session about midday or afternoon. After that, I hit the studio that night to start demos, finish songs or rehearse for our next run of shows. I absolutely adore the team we're building so it makes everything an absolute blast.

Harley : I like the relationship part. They way it helps me connect and understand people from a completely different background than me. The idea that I can be a voice for someone who feels quiet or doesn't feel like they have one is an amazing responsibility and I love that.

Harley : We have a lot coming up: shows, music videos, live videos, EP's and single releases. We're just getting started.