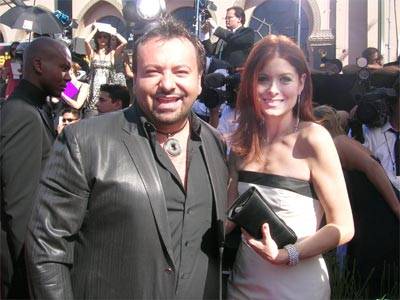 Napoleon and his team of makeup artists worked overtime at the Primetime Emmy Awards, looking after presenters backstage before they went on and in the press tent after winners won their awards. Everyone from Kanye West to Al Gore to Helen Mirren to the cast of The Sopranos to Alec Baldwin, Tina Fey, Ali Larter, Sally Field, America Ferrera, Felicity Huffman, Queen Latifah, you name it! 'The Insider' was in the Napoleon Perdis pamper area doing all their interviews and capturing celebs getting their makeovers.

Napoleon commented on the makeup trends evident at the Primetime Emmy Awards. "It's a classic Hollywood glamour trend, with a red lipstick, nude eyes. The ones who had foundation used primer, so that's really important to keep your makeup lasting longer. Lashes, mascara - really thick, long lashes; individual sets along with 2-3 coats of mascara.

Matte setting, matte foundation so that it gives reflection buy dewy. And blush like the Blush Patrol, you know it's like a blush and luminizer in one. That's really big. And then really nude lips like using Sydney Gloss Patrol, with Dallas or Tokyo on the top. And lastly, body shimmer. Everyone's got body shimmer, like my Gardenia Glam lotion."

Napoleon's favourite celebrity moments:
Getting in on Robert Duvall's interview with 'The Insider' - they had an instant connection.

Getting a huge hug from Debra Messing on the red carpet. Debra had her makeup done by Napoleon on Friday for the Performer Nominee Party (one of the many pre-Emmy events). Her favorite products included the Auto Pilot Skin Primer, Lip Service and Eye Spy, Long Black Mascara, while eyeliner in the inner rim of her eyes, DeVine goddess lipstick, sand beige Loose Eye Dust, Foundation stick, Blush Patrol and Summer Range French Lemon Body Lotion.

Telling Patricia Arquette about my Auto Pilot. Her makeup artist is Australian and her publicist already knew of the brand and uses the products.

Meeting Al Gore who is visiting Sydney this week and having a chat about Australia - they had a big connection.

Jeremy Piven smelled like heaven (according to Napoleon's US Publicist)

James Spader was very cool and very scary to meet.

The Entourage boys were having a blast, cool as can be, not a worry in the world.

Ali Larter was skinny and tripping on her too-long dress because her non-existent boobs couldn't hold it up.

Hayden Pannettiere and America Ferrera were both so short and the cutest girls. America was thin and humbled. Hayden was like a butterfly chatting people up and really enjoying herself. 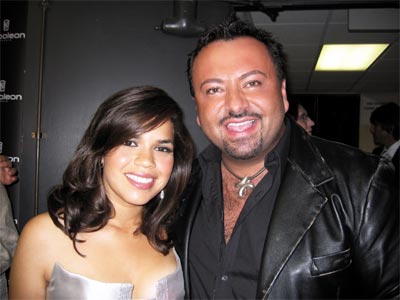