Western Australian artist Paige Valentine is ready to lift the veil on the stunning video accompaniment to her latest ethereal single 'Pure'. Teaming up with local Freo filmmaker Luna Laure, the video opens the door to a new world of metaphorical wonder and awe, shining a spotlight on both the nuanced delicacies of Paige's songwriting and the subtle yet detailed lens through which Laure creates.

"The experience of working with Laure and her crew was once in a lifetime. We shot on film, built the props over two days, one of the crew half jokingly asked for a wall in my house to be painted for the shot in a day and my best friend came over in her lunch break and sure enough - gave us a pink wall. It was shot at my home studio "Lucky Blue" here in Fremantle, which was a perfect fit with its quirky lino, old wallpaper wall (mid-reno) and Laure (director) and Bee (styling/hair/MUA) dreamt up the finer details of the scenes. When Laure came over for the first time, I ended up giving her a bunch of plants from my garden I'd grown from seed without realising she'd built the plot around me growing a plant representing love / relationships. I now have a permanent hole in the lino from the fire that resulted in my manager hiding under the kitchen table with a bucket of water, but the clip was so worth it and we all had so much fun in the two days of the shoot, ending with a late night of red wine, pizza and lots of post-covid hugs. . Truly honoured to work with such incredible and fun creatives." – Paige Valentine

Releasing new music in 2020, a year that will go on record as being cursed for the music industry at large, Paige Valentine has found herself swapping festival stages for live streams... a trade that may feel like a step down in the interim, but is ultimately the shape of things to come for musicians. Paige has embraced the sea change, launching 'Pure' mid-lockdown to a worldwide captive audience of people much in need of some light at the end of the tunnel. And this has always been what Paige Valentine's music provides: light.

Already a five-time WAM Award nominee and Vanda & Young International Song Competition finalist, Paige's songwriting has gained her substantial accolades. Flattering as this may be, Valentine's motivation is purely her music; to write the best songs she can, and deliver them with honesty and tenacity. A new direction for a new era, the release of 'Pure' will not only bookmark the next chapter in Paige Valentine's career but the strange times into which it was born, where all of us are reminded by its absence, just how precious live music actually is. Paige shows no signs of slowing down in 2020, with another single already in the works and hints of an EP on the way, so keep an ear to the ground for what will surely be more impressive things to come.

Paige Valentine : I would describe my music as singer / songwriter with alt-pop touches on production. For any of my songs to work they have to be stand alone songs on guitar and piano before they hit the studio.


Question: Can you tell us about Pure?

Paige Valentine : Pure is an exploration of unravelling time to when you first meet someone. It's kind of like reaching a point where both of you are different people who love each other and you can't pinpoint where it started unravelling you just know that it has. So choosing to remember why you love someone and trying to hold onto that while you both evolve.
Pure was inspired by witnessing a number of friends in long term relationships all break up around the same time and I was remembering when they fell in love and how powerful it was and how they could get it back.

Paige Valentine : I hope my listeners give themselves permission to feel things and that it's ok to grieve a relationship or hope it will improve, that every feeling or experience or longing is ok. I hope it makes them feel understood. We are so harsh on ourselves as human beings and we feel so much. Life can be really messy, uncomfortable and there is so much light, power and growth in those stages. I hope they see a little chunk of my soul and my story resonates in many different ways for the listeners.

Paige Valentine : Strangely I have been incredibly productive, which I wasn't expecting. I thought I would just wallow, or have a Britney Spears-esque shaved head meltdown. Once all my live shows stopped it was pretty scary for the first few weeks, I was also separated from my family and friends who all live in the South West. I decided to stay at my Freo home/studio "Lucky Blue" and listened to a bunch of Joni Mitchell and played a lot of piano. I did quite a few writing sessions with other musicians on zoom which was really comforting and productive. It just really made me realise how lucky we are to be able to play music and express; so the shows so far coming out of lockdown have been really electric and emotionally loaded. It definitely influenced it for the better I became crystal clear on the songs I want to write and where I want to take this project. COVID actually stopped me from being so busy and I got time to know and connect to myself again, which was a really powerful experience.


Question: Are you planning a tour once the restrictions are lifted?

Paige Valentine : I wasn't planning a tour but once 'Pure' got on the radio I had 5 venues reach out asking me to play, so it kind of organised itself in a day! 3 of the 5 so far have sold out and have just been absolutely magic. The seated restrictions and also the fact no one has seen live music for months have just made the shows so incredibly reverent. You could hear a pin drop. I have to stop myself crying often because I just can't believe how insane the energy is in the room and that songs I've sung in my bedroom for so long are being listened to and sung back to me. It's crazy. 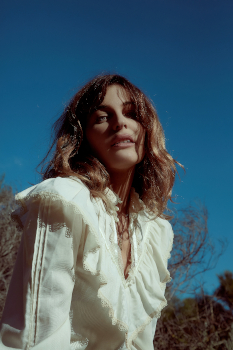 Paige Valentine : I am motivated at the strangest times. Mostly when I'm driving (I love road trips) so thank goodness for voice memos on the phone. I'm about to take off to the WA wilderness for 5 or so days, so time in nature always inspires me. Often I'll just be doing a meaningless task like gardening or wake up out of my sleep and have this melody in my head. Sometimes it drags me to the piano, other times I let it be a melody that just passes on its way and hope I can remember it later.

Paige Valentine : I guess growing up and living regionally has been somewhat of a challenge and a blessing. I grew up 3 hrs south of the most isolated capital city on earth. There's not many recording studios or managers and you definitely feel a little out of the loop, but more and more there are incredible opportunities for regional musicians and festivals that showcase local talent. That's the real key, there are so many hidden gems in west australian music I can't wait until the world catches on to some of the music that is written over here, it is world class.

Paige Valentine : I LOVE a slow morning. (I usually write/read late at night) so waking up, popping the coffee machine on, watering the garden, sitting outside in the sun or going for a long walk along the beach in Fremantle is the perfect start to the day. By mid morning I start a work out and some admin. Afternoon I'm usually in the studio for a few hours, early evening I'll try to get to a sunset and when I come home put candles everywhere, have a bath, listen to music, and make some delicious food. In my head I'm a wannabe french-woman so I just make everything as romantic as possible.

Paige Valentine : Honestly it is musics' gift to make me truly be myself. Songs and expression make me be brave and vulnerable, I kept myself small for a long time thinking a lot of self limiting thoughts. It has been so rewarding to keep pushing through that and to have the connections I do to the people who like my songs.

Paige Valentine : There are two more shows on the "Pure" single tour which are at Cleaver St 26th of June and back to my beloved Esperance for a show at Woody Island (yes an actual island gig!) on the 4th of July. I'm finishing writing for the next EP over the next five days out in the wild west somewhere. When I come home to Fremantle I'll do a few more days in the studio and continue to plan the next single release and film clip. I'm really proud of the next single and so excited for the story of the EP to unfold as I've loved working with Luna Laure who's directing the film clips to create a visual story with each song.