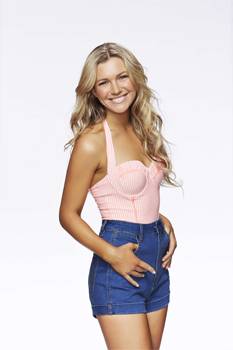 Currently playing bubbly series lead Georgia Brooks on the acclaimed long running drama Neighbours, Saskia spends her time between Melbourne and her second home in Los Angeles, where she holds representation with Untitled Entertainment, alongside the likes of Sofia Vegara and Olivia Wilde.

Growing up in Perth, Western Australia, Saskia attended the Perth Modern School on a music scholarship. As a teen, Saskia appeared in commercials, community television and short films. Her screen career escalated in 2007 when she scored a leading role in Hollywood Sign Girls, which was selected for the St Kilda Film Festival later that year. Subsequently, Saskia moved to Melbourne to pursue her love of performing and was quickly snapped up as a series regular for hit miniseries Mark Loves Sharon, starring and written by Jason Gann (Wilfred).

Following on from these roles, Saskia secured lead roles in feature film Arctic Blast and web series, Shutterbugs as well as supporting roles in City Homicide and Twentysomething.

Heavily invested in philanthropy, Saskia holds a Bachelor of Social Work (honors) and has passionately supported young people through her work at non- profit The Reach Foundation and the Melbourne Royal Children's Hospital. Saskia has travelled extensively, is an avid 'foodie' and health-nerd, having studied health coaching at the Institute for Integrative Nutrition in New York.

Currently acting as a celebrity ambassador for the 2014 Stella Fella campaign helping to raise awareness on sex trafficking and exploitation as well as charity movement Makeup Free Me, which helps to empower young women through positive body image messaging.

Question: Who or what originally inspired your acting career?

Saskia Hampele: I'm not actually sure, to be honest. All I know is I loved performing from a young age and got myself involved in anything to do with acting, singing, dancing or music from when I was a toddler. As I got older, watching films like My Girl, The Professional and Girl Interrupted, really got me hooked on the idea of becoming an actress and playing strong and complex characters. I always loved the idea of trying out someone else's life.


Question: What do you love most about your role of Georgia Brooks in Neighbours?

Saskia Hampele: I love playing Georgia! Life keeps throwing some pretty heavy stuff her way, but she always maintains her integrity and optimism, even if it gets challenged along the way. She's a great role model - she's caring, loving, naive - but can also be strong, independent and fearless when she needs to be. She's the kind of girl I would love to have as a friend.


Question: How do you go about splitting your time between Melbourne and Los Angeles?

Saskia Hampele: I haven't been able to spend time in LA since Neighbours came along as I am full time on the show in Melbourne. But I've lived in LA for a few months at a time for the past few years and love the endless sunshine. Acting is such a great job in this day and age, because you can be in any city (LA, Melbourne, Sydney etc) and be sending audition tapes online for projects all over the world. In fact, when I auditioned for my role on Neighbours I was in the outback in Kakadu NT!


Question: Why is it important for you to use your spare time to give back through various forms of charity work?

Saskia Hampele: I've always been really passionate about understanding and having a curiosity about other people's lives and their unique experiences. I guess that's why I love acting. But it also means that I am acutely aware that everyone has their own struggles and that the world can be an unfair place. I studied social work at uni and love creating honest conversations around things like body image and the struggles we go through as young people. I find that spending my time talking about real shit is so rewarding and keeps me down to earth and grounded.


Question: How do you stay healthy whilst working long hours?

Saskia Hampele: I'm a bit of a health nerd and try to eat lots of veggies, never skip a meal and get outside and moving my body as much as possible. If I don't keep myself on track with this stuff and eat crappy foods, I find I don't have the energy and vitality I need to do my job and face the early starts.


Question: Can you talk us through the importance of participating in the charity movement Makeup Free Me?

Saskia Hampele: Negative body image is a pretty common experience for us girls, and I am no exception. I think it is an issue that doesn't get talked about enough, so when Makeup Free Me approached me to be an ambassador I was thrilled to voice my opinions. There can be a public perception that as a 'celebrity' I must be super confident and happy with the way I look, but feeling comfortable in my own skin can be a massive struggle sometimes. By stripping down the layers and mask that we wear every day by going without the makeup, photoshop and filters, we're taking a stand against the pressures and scrutiny we feel to look like the girls in the magazines, who don't even look like the girls in the magazines!

Saskia Hampele: A typical day involves a 5am wake up for a 6am call. I get into costume and have an hour in hair and makeup before the fun begins. Each day is different but can involve studio and location shoots, publicity photos, costume fittings and lots of hanging around in the greenroom with the other cast. Evenings are my chance to unwind at home, learn lines for the next day and cook up a healthy, delicious dinner. Sometimes I will head out to an event or play netball in the evenings if I don't have an early start the next day.

Saskia Hampele: Confidence has been a big challenge for me. There were times when I thought acting was just a pipe dream and I should give up. But something in me always kept going and pushed through the doubts and negative thoughts. There is so much rejection you experience as an actor, but I try to be grateful for every exoerience I am lucky enough to get and not take anything personally.


Question: What has been your favourite part of becoming an actress?

Saskia Hampele: I love everything about it. I get to play make believe for a living! Every day is different, challenging and fun and I love getting inside the head of a character and learning from their experiences. I know I am one of the lucky few and try hard not to take it for granted.


Question: If you could work with any other actress, who would you like to work with?

Saskia Hampele: Meryl Streep. Hands down. I feel like we would be great friends.


Question: What's one piece of information most people don't know about you?

Saskia Hampele: I used to compete in the Nationals in horse vaulting (gymnastics on horses - think Cavalia)

Full Name: Saskia Hampele (no middle name!)
Nickname(s): Sas, Sasquatch, sassafras, Kia, sultana, just to name a few
Star Sign: Taurus
Favourite Food: Seafood!
Favourite Film: Empire Records
Favourite Actor: Robin Williams
Pet: A kitty called Looey
Person You Would Most Like to Meet: Beyoncé
Hobbies/Interests: Cooking
First Job: Waitress at my Mum's cafe
Are you a Pub, Bar or Club kind: Definitely a nice cocktail bar
What Can You Never Leave Home Without: Pawpaw ointment
What is the first thing you think of when you wake up in the morning: Going back to sleep