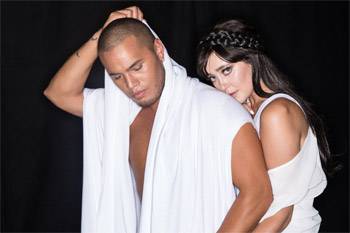 Question: How would you describe Holding You?

Ginny Blackmore: Holding You is our new single, a duet that we wrote together; it's a love song.

Stan Walker: It's not the love song you think it's going to be; it is more about being grateful that you have love in your life. Every time I hear it, I am grateful, lucky and blessed to have someone to love me and allow me to love them.


Question: What was the main inspiration for you, when writing Holding You?

Ginny Blackmore: The reality of love. I haven't had the best luck with love, in my life which is probably everybody's story, bar a couple and it was more about being realistic about love. A great, amazing love is different to what we imagine although it is beautiful. I am grateful that I have love in my life, it's very important to love who you are with.


Question: What was it like recording the track in Auckland?

Ginny Blackmore: I normally record all by myself and engineer myself alone so it was slightly intimidating to be recording with an amazing singer who got to hear all of my bad takes and bad notes. I was intimidated but it was really good and we were able to support each other, it was nice to hear each other record.

Stan Walker: I was intimidated and I knew coming into the process we were so different in terms of the types of singers, we are. Ginny Blackmore is smoother, gentler and more R&B whereas I'm a constant roar with moments of softness. I had to come down to where she was and she had to come up to where I am. It's not that because I sing louder, I'm more powerful as a singer; being soft and holding soft notes makes you more powerful. We found we had to meet each other halfway.

I'm not trying to talk up our song… but I think it's the best duet I've heard for a long time (laughs).


Question: What did you two learn about working with each other on Holding You?

Stan Walker: I learnt a lot.

Ginny Blackmore: I knew I had a part of my voice that I wasn't accessing and Stan made me bring that out, a little bit more.

Stan Walker: This was the same for me, it's not that I don't want to sing softly or access that part of my voice, it's that I'm not used to it as I usually sing big in the studio with producers. I realised I had another part of my voice that I needed to use and Ginny allowed me to use that, which was really weird (laughs).


Question: Can you tell us about being a judge on X Factor?

Stan Walker: What an experience! I think I learnt more in the six months on X Factor than I have in the last three years. I learnt how to manage myself as an artist including time and not faking it, I find that I used to fake it till I'd make it but I learnt a lot about the reality of being myself and being a manager. On the show I had to manage three acts from choosing a song, to developing the stage and lighting to the arrangement of the song whilst being encouraging and teaching at the same time. It was awesome yet hard at the same time but I learnt a lot and I'm taking that with me and hopefully growing and getting better as an artist.


Question: What's next for you, in regards to music?

Ginny Blackmore: I have a follow up single and my album is almost finished and it will be released soon. I spend most of my time in Los Angeles writing for other artists and focusing on my career; so basically world domination (laughs).

Stan Walker: Same for me, I want to take over the world… I have been working on my album for two years and this is the first time I've had time to really discover myself and my voice as my voice has changed three times whilst recording this album. I have been adjusting to my new voice and I have a new single to release after Holding You. I am excited although we haven't locked in which single will be released, next. But new music and a new album will be coming for Australia and hopefully a tour after that!

Ginny Blackmore: That's a hard one, I love recording in a studio as I love pushing my voice to see if I can come up with something new and working on background vocals. I always feel as if performing live will be a little tense and difficult but when the crowd is emotionally hit by what you do that takes over. I love both, equally.


Question: Holding You is such a success; is there somebody else you'd like to collaborate with?

Ginny Blackmore: I'm a big fan of D'Angelo and I'd like to do something with him.

Stan Walker: I'd like to work with Alicia Keys or Pink.


Question: Which artists are you currently listening to?

Ginny Blackmore: I have a pop crush on Rihanna

Ginny Blackmore: I google Rihanna and what's she is wearing every day.


Question: What would you say has been your biggest challenge in regards to your music career?

Stan Walker: Waiting. Being patient… regarding everything including waiting for people to come and line with what you're willing to do and to come on board.

Ginny Blackmore: Waiting for people to see in you what you know in yourself. You have to wait a long time.

Stan Walker: You need serious patience in this game.