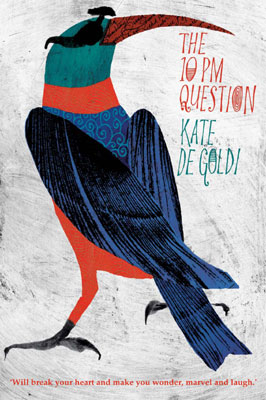 Are the smoke alarm batteries flat? Does the cat, and therefore the rest of the family have worms? Will bird flu strike and ruin life as we know it? Is the kidney-shaped spot on his chest actually a galloping cancer?

Frankie Parsons is 12 going on old man- an apparently sensible, talented Year 8 student with a rodent voice of worries steadily gaining volume in his head. At first Frankie's life seem pretty normal-friends, siblings, aunties, uncles and the usual school issues. But gradually it is revealed that he has a catalogue of persistent anxieties, invariably voiced in the form of a '10pm question' to his patient Ma each night. But of course, it is Ma that is the cause of the most worrying question of all, the one that Frankie can never bring himself to ask- why is it that she never leaves the house?

Sydney is the new girl at school- feisty, confident and unconventional, she crashed into Frankie's life and the two are soon inseparable. As it turns out, Frankie's new friend has a difficult mother of her own- while Frankie's mother is unable to face the world, Sydney's mother is rarely around. But Sydney also brings with her a whole raft of questions of her own- relentless, unavoidable questions. And so begins the unraveling of Frankie Parson's carefully controlled world.

The 10pm Question is a novel which defies all age categories. It does so with a sparkling wit and an operatic cast of characters so delightful and maddening they become dear to us.

Kate De Goldi lives in Wellington. She has won a number of accolades for her fiction, including the Katherine Mansfield Short Story Award and the Esther Glen Medal. Her book Club, illustrated by Jacqui Colley, won Book of the Year in the new Zealand Post Children's Book Awards in 2005. In 2001, Kate was made a New Zealand Arts Foundation Laureate.