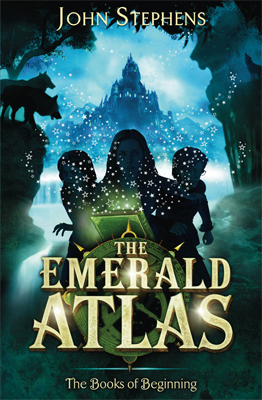 They were taken from their beds one frozen night, when the world was covered in snow. The silhouette of a tall, thin man has haunted Kate ever since.

Ten years on, Kate, Michael and Emma have grown up in a string of miserable orphanages, and all memories of their parents have faded to a blur. Arriving at Cambridge Falls, where the rolling fog distorts their sense of time and the town is eerily silent, the children quickly realise there is something different about this place - and Kate feels sure she has seen the dark, crooked house before.

Exploring the house, they discover an old, empty leather book. The moment they touch it, an ancient magical prophecy is set irrevocably in motion, and the children are thrown into a dangerous alternate reality of dark enchantments, terrifying monsters, noble dwarves and entire cities buried beneath the earth. Only they can prevent the terrible event that will ruin Cambridge Falls - and stop the world from falling into complete devastation.

John Stephens received his MFA in Creative Writing from the University of Virginia in 1998. He then moved to Los Angeles, where he has worked as a writer-producer on Gilmore Girls and The O.C. John Stephens is taking leave from his television career to pursue his passion for writing for children. The Emerald Atlas is his first novel.