Despite the ridicule, rumours and incessant gossip about her weight, relationships and status in the fashion world, Victoria Beckham continues to fascinate us.

Splashed on the covers of magazines on a weekly basis, and with the press digging even deeper into the everyday nuances of her life, she is, without a doubt, the most iconic British woman today. Who would have thought the former Spice Girl would rise to such glorious heights?

In this book 'Victoria The Biography', Sean Smith, the UK's leading celebrity biographer and a former newspaper columnist, delves into Victoria's early years, pre-fame and superstardom. He delivers a tell-all biography offering a rare insight into the rise and rise of the woman viewed as the new Hollywood royalty.

Victoria Caroline Adams was born on 17th April 1974 in Harlow, England. A natural entertainer Victoria loved singing and performing from a young age but when puberty hit the only attention she received was in the form of cruel names from her school peers, calling her, including 'crater face' and 'four-eyes'. Just like any normal teenager, Victoria Beckham's school years were plagued with bullying and insecurity. Overweight, spotty and virtually friendless, her first kiss was with her first boyfriend at the age of 16 and she lost her virginity seven months later. Victoria Beckham went on to say "Some people feel embarrassed if they haven't slept with many people, but I don't think it matters."

While she was often considered the weakest Spice Girl vocally, she soon soared in popularity and wealth through her relationship with footballer David Beckham. Along the way there have been difficulties- with food, jealously and David's over-attentive female fans. But there have also been remarkable highs- her marriage to David Beckham, the birth of their three boys and the enormously successful Spice Girls reunion tour. But despite her star status, critics continue to undermine her, deriding her apparent lack of musical talent, constantly scrutinising her body shape, her looks and her hair as well as speculating wildly on the state of her marriage.

'Victoria The Biography' is an affectionate and insightful biography of an often underestimated superstar. 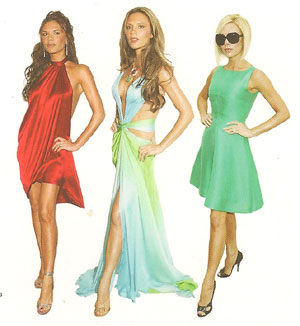