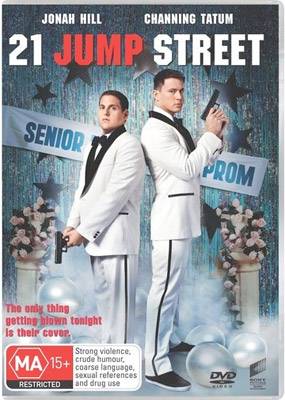 Former high school foes, Schimdt (Hill) and Jenko (Tatum) play bumbling young cops, tasked to join the secret Jump Street unit. As part of their assignment, they must pose as students and investigate criminal activity inside their old high school.

In the midst of the investigation, the hapless duo find that high school is nothing like they left it just a few years earlier. As they trade in their guns and badges for back-packs, Schmidt and Jenko risk their lives to infiltrate a violent and dangerous drug ring. Acting and living like 17 year-olds once more, they slip back into their adolescent selves and risk the case - and their friendship - with hysterically disastrous results!

Special Features:
Commentary with Directors and Cast
Not So Slim Shady
Gag Reel
Cube-O-Rama
Back to School
Brothers In Arms
Johnny Depp On Set
The Rob Riggle Show
Peter Pan on The Freeway