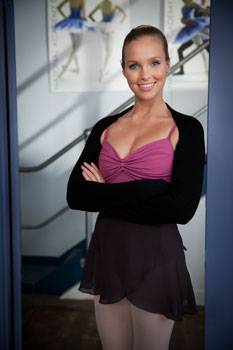 As a teenager, Alicia shot to public attention as one of Ja'mie's friends in Chris Lilley's hugely successful Summer Heights High for ABC TV. She then went on to film four series of Disney Australia's As The Bell Rings in the key role of Amber, a role which showcased her comedic skills beautifully. Alicia has worked professionally since a very young age, making her feature film debut as a young Miranda Otto in The Dead Letter Office. Early TV credits include Halifax f.p, Rove Live, In Melbourne Tonight and as recurring role in Neighbours.

In recent years, Alicia has become widely known for her work on Dance Academy. Other TV credits include the recurring role of Leah in the critically acclaimed series Tangle for Southern Star/Showcase, along with a lead guest in Rush for the Ten Network.

Alicia studied dance from the age of four and spent three years at the Victorian College of the Arts learning classical ballet, contemporary dance, tap, jazz, character dance, lyrical and acrobatics. She also studied Funk and Hip Hop at TJAM.

Alicia Banit plays the role of Kat Karamakov, in Dance Academy:
Kat Karamakov
Studies by clever boffins show that smiling and continuous exercise are two activities, which release endorphins – nature's anti-depressants. Therefore if I keep this up, I'm going to feel amazing. And if I feel amazing, this whole year will be a piece of cake. Not that I'm allowed cake.

Kat returns to the Academy like no Kat we've seen before. She has finally decided to commit to ballet, body and soul and is not only motivated to blitz her Second Year assessments but has taken on the mammoth task of fast tracking her training so that she graduates Third Year on the original timeline, with her friends. 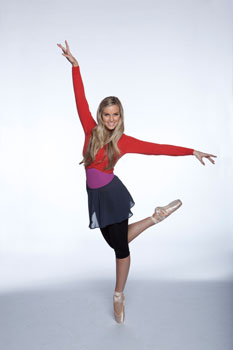 But in trying so hard to morph herself into a ballet bot, Kat's avoiding some pretty big issues. This year will strip back the layers and Kat will slowly figure out who she is beneath her smiling, effervescent exterior. This year will also see her discover a talent she was never interested in possessing; one which might turn out to be the -thing' she's always been searching for.

Question: Can you tell us about Dance Academy The Complete Third Series?

Alicia Banit: I think it would be really nice for people to sit down and watch the entire Dance Academy series (first, second and third series) in a couple of days to see the growth with all the characters. I am very excited to watch all the three series, together as I haven't watched the first or second series in a while, it would be great to watch it all together.


Question: Do you ever feel weird watching yourself on the television?

Alicia Banit: Sometimes I do, everyone is always their worst critic which is definitely something to be said about me. I am very harsh on myself and I personally like to watch myself back to see what I could improve on and change. When I finish a season, if I feel as if I -smashed' the season, I like to watch it back to see how it all ends up together whether that is that I'm glad with how it turned out or if it's not as good as I thought it was.

I don't love watching myself but in a learning sense, I do.


Question: How does your character, Kat Karamakov, change in the third series of Dance Academy?

Alicia Banit: The third series showcases Kat Karamakov as the most emotional that we've ever seen her, obviously we've had the death of her best friend, Sammy and a lot of issues have come out because of that. I've said it in each series, but in this series there is a lot more self-discovery especially because Kat is figuring out what she doesn't like about herself which is coming out in a horrible way with bulimia and it's a very intense time for Kat in the third series.

There are many happy things that occur during the third series of Dance Academy including the movie Kat gets to do which was amazing and fun to shoot. Kat also begins to discover that ballet may not be her calling, in life and maybe acting is…


Question: What do you enjoy most about acting for Dance Academy?

Once I started Dance Academy I was able to meet the cast and crew and we all became a family which has created an amazing environment to be in. The entire process of Dance Academy was the most amazing thing, I've ever done. 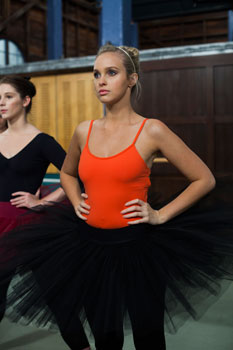 Question: What similarities do you share with Kat Karamakov?

Alicia Banit: I do, I share plenty of similarities with Kat; she and I are the life of the party as we are bubbly and like to have fun. We don't necessarily poke fun at people but are the funny one in a group. Within the first series Kat is definitely the funny character and is quite blunt in what she says which does make her funny. I think I'm pretty funny (laughing) at times.

Kat and I have a love for dance and getting into the third series Kat falls into acting which I feel as if happened to me, I fell into the performing world and acting. We have many, many similarities! We look the same (laughing).


Question: What's a day, on the set of Dance Academy, like?

Alicia Banit: It's amazing on set because we have the most amazing cast and crew. Everyone is really supportive especially when it comes to emotional scenes, the crew allows everyone to have their space and be quiet so the actor can get into their character. With funny scenes the crew gets involved and everyone will be laughing, it's an awesome experience and I loved being on set at Dance Academy, it was a dream.

It was awesome but also intense; there was a scene we had to film where we struggled as we had to do a jumping exercise and we had to talk at the same time; it was so difficult to remember chorography, remember lines and perform as well, it was really hard. It wasn't the easiest job in the world but it was worth it!


Question: How do you prepare for your role as Kat Karamakov?

Alicia Banit: There is a lot to prepare, before we start filming we have a month of ballet boot camp (which is what we called it) where we do five days a week of ballet, tap, contemporary and hiphop classes along with personal training sessions. On top of that we did drama rehearsals with a drama coach to work on the script and picking up on where we left off with our characters. We have an entire month of Dance Academy training before we start filming.


Question: Do you have a favourite dance style?

Alicia Banit: I'm working on my acting skills and I'll be heading off to Pilot Season in America at the start of 2014. Who knows? The world is my oyster at the moment! 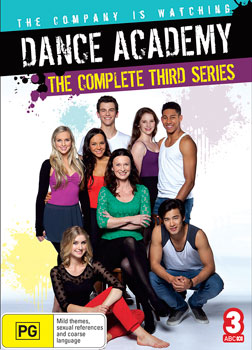 Third Year was always going to be the ultimate endurance test and it was easy to lose perspective because there was this one thought playing over and over: This is the rest of your life. You'd trade both arms for that Company contract and now we were so close, we were petrified it could slip right through our fingers...

Tara begins Third Year with the goal of living up to Sammy's memory. She will put friendship above boys, try to make peace with former enemies and do everything in her power to ensure competition doesn't drive her classmates apart. This is easier said than done given that Third Year is essentially a twelveamonth audition, and none of them can forget for a second that the Company is watching.

As the year gets underway, Third Year is thrown into a spin when the Company requires three students to fill in for the corps de ballet during their Sydney season. This is a backstage pass like no other. The students will perform every night with the Company and actually live the dream they've been striving towards. This opportunity creates turmoil for the students who haven't been selected and now doubt they'll receive a contract at the end of the year, regardless of how hard they work. But all isn't bliss for the favoured few either not only are they shocked by the nightly grind and their lowly ranking back row in the corps, they risk antagonizing their future employers with every potential step.

When the Company season ends, preparations for the Third Year tour begin, where the students travel around Australia performing in regional and remote centres. For Tara and her friends, this is a chance to experience what it's like to be a dancer on a professional tour and a way to sharpen their allaimportant performance skills. In close quarters some romances blossom and others fall apart. Not everything that happens on tour manages to stay that way. It is the most nail-biting year yet and before we know it we are upon graduation day and the life changing Company interview. Dreams and futures are on the line as our seniors prepare for their final audition. It will shock everyone who is offered a contract, who turns theirs down, who ultimately gets their dream and who has to find another.