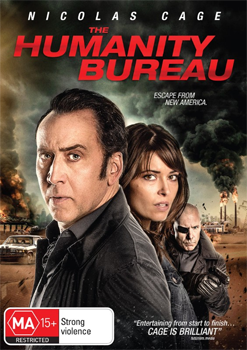 Nic Cage fights for our future in a world ravaged by climate change and economic catastrophe.

The year is 2030, the world is a wasteland, and in a desperate attempt to restore society, the Government has created The Humanity Bureau – whose job is to assess and remove citizens deemed to be a burden on the system. When veteran Agent Noah Kross (Cage) is sent to investigate the case of a single mother and her young son, it sets off a chain of events that could change everything…exposing the Bureau's secret methods and the fate of those it has judged.

Co-starring with Cage are Hugh Dillon, best known for his role as Ed Lane in TVs Flashpoint and Sarah Lind from TVs True Justice.

When asked about the films storyline, director Rob King says: "The movie plays in the not too distant future, which is ruined by global warming, but it's also about a man trying to reconnect with his own humanity. The story is really relevant to today's society. The government takes control, there's no democracy anymore. In a way, the movie is encapsulating the fears so many people have about the near future. There's lots of conversation these days about what's happening on the news, what's happening with global warming, what's happening in the scientific community and I think that the script speaks to them. It approaches something that's very current and very relevant."

Nic Cage who describes filming in Canada as amazing says: "Playing Noah in the movie was the experience of having the chance to work within science-fiction again, which is one of my favourite genres, because I think that science-fiction is probably the best friend, the best ally, the best advocate for freedom of speech. You can make a lot of social commentary."

On working with Cage King says: "Nic was wonderful. He was just a true pro and he came to set every day like a lion, ready to go, had really thought about the character and I think he has really brought the level of the project up."

Producer Kevin DeWalt is also a fan of Cage. He comments: "Nic is one of the most professional actors that I've ever worked with. I've never ever had anyone of that status that came here and be so humble, so it's just a treat to work with Nic." With a real heart to the story, expect some great performances, expect great action, expect a lot of fun watching it.