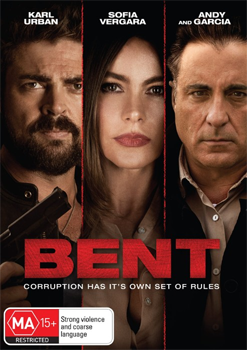 Upon his release from prison, disgraced former detective Danny Gallagher (Karl Urban from Star Trek) makes a plan to seek revenge for a drug bust that went horribly wrong, claiming the life of his partner and painting him as a bent cop. His search for the truth will lead to an old friend (Andy Garcia), a seductive Federal Agent (Sofia Vergara from Modern Family) and a car-bombing that could be connected to an elaborate, high stakes conspiracy.

Bent springs from pen of the novelist Joseph O'Donnell, who narrates: ""Gallagher, the protagonist, is the man that all the boys dream of becoming and all the women dream of having by their side." O'Donnell goes on to say: "Director Bobby Moresco did a masterful job in adapting my novel to a feature length motion picture in the classic tradition of film noir. Seeing the characters I created come to life on the screen was indeed an unimaginable thrill for me. Bobby also consolidated several minor characters from my novel and created one compelling new character, Murtha (Andy Garcia), who plays a vital role in the plot of Bent," said O'Donnell.

The choice of Bobby Moresco as director came about following his work on the movie Crash, directed by Paul Haggis. Moresco and Haggis wrote the Crash screenplay together and went on to win an Oscar for Best Original Screenplay (2006). When discussing the film, Moresco says: "Bent examines the themes of loyalty and betrayal played out through the vast corruption of our most secret government agencies along with the compelling characters of society's criminal underbelly. Bent delivers on the best of film noirs."

Providing added value to the project is the unquestionable talent of the three main protagonists. Karl Urban is a formidable actor with a vast resume of fantasy and sci-fi films, but who fits seamlessly into roles in the thriller-action genre. Andy Garcia doesn't need introductions, amidst Oscar nominations, Golden Globes and superb performances. On set he was the film's veteran, providing precious advice to cast and crew alike. Finally, there is the indisputable allure of Sofia Vergara, who, in a striking new role for her (we are primarily accustomed to appreciating her in comedic parts), displayed her talent and extraordinary versatility, becoming at first the film's gamble and then it's pleasant surprise