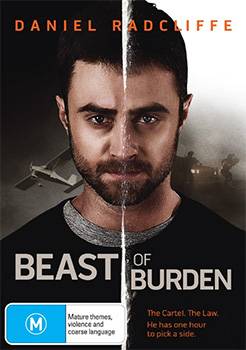 Radcliffe plays pilot Sean Haggerty – a trusted mule for an international drug Cartel running cocaine across the U.S./Mexico border.  Little do the Cartel know, however, that Sean is also working for the U.S. Drug Enforcement Agency (DEA).  Alone in a small plane, Sean is faced with the burden of choosing between his allegiance to the Cartel, his deal with the DEA and saving the increasingly tense relationship with his sick wife.  With everything on the line, Haggerty must navigate one last mission in the endlessly suspenseful film.

The film's supporting cast includes Grace Gummer and Pablo Schreiber. Gummer, best known for her role in TVs Mr Robot and the feature films The Homesman and Jenny's Wedding, plays Radcliffe's ailing wife Jen Haggerty.  While Scheiber, from TVs American Gods and Orange Is The New Black, plays shifty DEA Agent Bloom.  But its Radcliffe who really shines in the film, carrying the intense leading role with consummate ease as he continues to chase new and challenging roles following his years as Harry Potter.

Most of the film takes place in a single location, focusing on Radcliffe's character Sean Haggerty in the cockpit of his airplane.  'It's definitely a strange one, being in the one location the whole time, but what it also meant is we were able to film very, very long takes, which I'd never done before.  We were doing 25 to 30 minute takes and it meant that after a while you really did forget the cameras were even there and what else was going on.  You just became the person reacting to whatever was being phoned at them.  That was a really fun way of working", says Radcliffe.

When asked why he decided to get involved with the film, Radcliffe says: 'I really liked the script, love this director and I thought the combination of this script and director could be something very very interesting.  That was what drew me into Beast of Burden."

On working with Radcliffe, Director Jesper Ganslandt says: 'Working with Daniel Radcliffe has been an amazing experience, he is such a great and professional actor and he has an enormous work ethic which gives so much to the screen."

Beast of Burden is now available on DVD & Digital.