Kate Beckingsale Nothing But the Truth Interview KATE HAS NEW RESPECT FOR THE PRESS.

EXCLUSIVE Kate Beckingsale, Nothing But the Truth Interview by Paul Fischer.

Beautiful Brit Kate Beckinsale has no difficulties, it seems, finding roles that get her juices flowing. Her latest, as a journalist whose outing of a CIA operative results in incarceration, is a case in point in the new political drama Nothing But the Truth. The Los Angeles resident is busy juggling motherhood, acting and still hasn't learned how to drive in this car-obsessed town, as she explained to Paul Fischer in this exclusive interview.


QUESTION: I guess this character of Rachel Armstrong in Nothing But the Truth was just irresistible for you to take on.


QUESTION: What drew you to this character? Did you know anything about the sort of semi-real background that the character is based on?

KATE BECKINSALE: I mean, I'd been aware of the Judy Miller, Valerie Plame case, but Rod took great pains very early on to say that it's not that story. He was excellent. I guess him being aware of the story inspired him to write this, but it isn't a character that's based on Judy Miller at all. So, yeah. I was aware of it. I really wanted to do it, because I thought the female character being flawed and blindsided, and having to carry such a huge part from the beginning of the movie to the end, was really a great opportunity. And it doesn't come every single day. Also to have big scenes with another very strong female character, which was just so integral doesn't happen, either. I thought it was well-written, interesting and it was a thought-provoking, current, interesting political movie.


QUESTION: How surprised were you that such a strong-minded male writer-director is able to create such strong-minded female characters?

KATE BECKINSALE: I know. His passion for writing these very finely tuned, intelligent, strong women is quite surprising, and great. I think he's very fascinating by women and respectful of them. I think he has a really cool mother, which I'm sure helps. 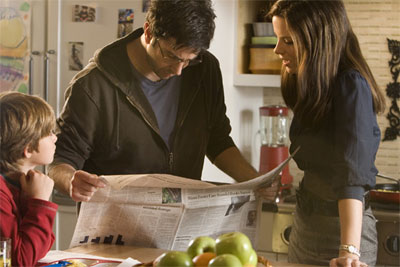 QUESTION: I understand that in doing some of the research for this, that even though you met with your real life counterpart, you mainly wanted to know what it was like for her to be incarcerated.

KATE BECKINSALE: That was really what I wanted to talk to her about, rather than the ins and outs of her specific case.


QUESTION: So, what did you learn? What was the biggest thing you learned from those discussions?

KATE BECKINSALE: Well, you know, it was interesting. I mean, the prison - because we shot it in a women's prison, you know? A prison. So the prisoners that I met there were not necessarily of the same background as my character and they weren't necessarily as educated. They were very sort of middle class women. And Judy was a great resource, in that she was somebody who had a very educated background and was mildly well-to-do and well-respected, and something that, just the other prisoners weren't. I really wanted to talk to her about her view of what prison was like. I don't think it's quite as down and dirty as my character's experience was, but I think it was the isolation, and the lack of intellectual stimulus, the lack of fresh air. Those are the things that really, really were tough. I think she was quite instrumental in beefing up their library and made, I think, a lot more friendships than my character.


QUESTION: How timely a film is this, given the changing political landscape in this country?

KATE BECKINSALE: I think it's great. I mean, we're all very excited about there being a new President. But yes, I think it certainly is timely and it's one of those films, I think, that does leave people talking afterwards, and discussing what their opinion is, and maybe finding out what their own opinions are, having not necessarily given it much thought, about exactly this issue with the shield law, and the First Amendment, and all that. You know, it's important that people have opinions, otherwise, you know, it can't be fought for. It can't be valued if people don't know what they think. 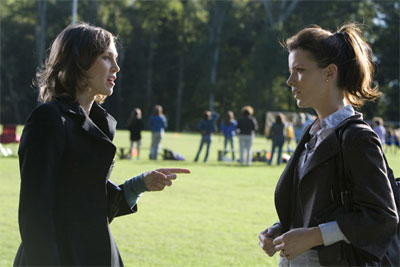 QUESTION: Did doing this movie give you a very different perspective on journalism?

KATE BECKINSALE: It did. You know, obviously, we're slightly trained to think of journalists as a healthy enemy, [LAUGHTER] to be slightly feared. And I guess we felt that there's nobility to it. There's such a vocational aspect to being a journalist. It's very similar to being - any sort of an actor. And I was struck in my research of all the similarities between journalists and actors, actually, but that was surprising to me.


QUESTION: Now, I remember two years ago, when I saw you at Comic Con, we were talking about Whiteout. The last time I spoke to you, which was about six months ago, I think, we still talked about Whiteout. And - and that movie's not coming out now 'til the end of next year, I believe?


QUESTION: Is it weird, for you to be doing press for that movie almost two years after completing it?

KATE BECKINSALE: I'm just so used to it. I did Snow Angels so long ago, and it came out, I think, two years later.


QUESTION: It was Snow Angels that got you this role, actually, wasn't it?

KATE BECKINSALE: It was, yes. But I'd never had that experience before. You make a movie, and for one reason or another, it takes a very long time to come out. I did a movie right when I did Whiteout, called Winged Creatures, that - we'll still waiting for that 'til next year. So I feel like I - you know, they take a very long time on the shelf before these things come out. You know, I'm starting to get used to it.


QUESTION: Unless, of course, you do a movie with Robert DeNiro, in which case they probably come out a little faster.

KATE BECKINSALE: I haven't seen that one's actually even now. I mean, I don't think it's necessarily - I always feel, when I hear about they're holding onto a movie, you think, "It must be terrible." But everybody - you know, the Whiteout crew are very excited about the movie and I think that - I guess they just have a bunch of things they have to release first I think Lion's Gate will hold them to that. 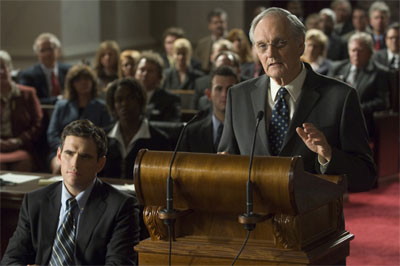 QUESTION: Yes. You'll be so tired talking about yourself by then.

KATE BECKINSALE: Yes. You'll be sick of me.


QUESTION: How intimidating is it to work with DeNiro, somebody that iconic?

KATE BECKINSALE: Very intimidating. And I was kind of intimidated, because I had a picture of him on my fridge at university, so I was a bit shifty about that. You sort of feel like you have to confess that to somebody. There's sort of a slightly creepy thing to it.


QUESTION: Do you know what you're doing next, Kate? I mean, are you -

KATE BECKINSALE: I don't. I mean, I've worked quite a bit. And, you know, I like to space that out with some time at home, you know, just sort of tuning out with Michael. And sort of regrouping a bit. And I haven't actually found something that's worth leaving my home and my life for yet. So I'm just hanging out.


QUESTION: Any desire to return to the theatre?

KATE BECKINSALE: I would like to return to the theatre, and I will. But I probably won't until my daughter becomes more indifferent about me being the one to put her to bed.


QUESTION: Is there a role that you want to do before you reach a certain age?

KATE BECKINSALE: No, not specifically anything - not specifically that. I'm very attracted to - I love Noel Coward. And, you know, to make movies that have that kind of snappy sort of arch wit to them in the dialogue. And so I'd love to do something like that.


QUESTION: And of course, the one proverbial question that I keep on asking you every time we meet - because we have the same thing in common - how's the driving coming along?


QUESTION: Okay, Kate. This is getting ridiculous.

Nothing But the Truth

As the film opens, the president of the United States has survived an assassination attempt. Believing that the leader of Venezuela was behind the plot, the U.S. launches a military attack against the country. In Washington, D.C., reporter Rachel Armstrong (Kate Beckinsale) has revealed that Erica Van Doren (Vera Farmiga), the wife of the U.S. Ambassador to Venezuela, is a C.I.A. operative who found no proof of a plot. Armstrong quickly finds herself contending with both Van Doren and special prosecutor Patton DuBois (Matt Dillon), hellbent on discovering Armstrong's source.

When she refuses to reveal her source, Armstrong is jailed for contempt of court. In the troubled year that follows both women will confront the harsh realities of life during wartime, including the questioning of their patriotism and even threats to their lives. As a Supreme Court hearing draws near, and with her family cracking under the strain, Armstrong must decide whether her individual needs trump the importance of civil liberties.

Lurie ably balances the personal struggles with the political machinations, while Beckinsale and Farmiga compellingly convey each woman's strength of conviction. The result is a challenging, chillingly relevant cautionary tale about truth and consequences.