In the world of Indie films, Sherman's Way, made on a miniscule budget, is getting quite the buzz, this road movie with a distinct twist. The film revolves around Sherman Black (Michael Shulman), an uptight Ivy League student who lacks spontaneity, escapes the grips of his smothering mother, Evelyn (Donna Murphy), and heads off from New York City to Napa Valley in California to surprise his girlfriend, Marcy (Marcy (Lacey Chabert), who is the one who wants him to be more spontaneous, so he hopes he can impress her by merely showing up at home during the summer.

He happens to arrive at her door at the same time that her secret lover arrives and, after briefly confronting her, gets the idea that he has been officially dumped. To prove, once again, that heís got spontaneity, he hitches a ride from Palmer (James LeGros), an ex-Olympic skier, free-spirited and unemployed who drives down the countryside with a red convertible that he had stolen. Eventually, Sherman meets a charming and friendly small-town girl, Addy (Nevin), who agrees to go out with him and, eventually, loosens him up.

A film that comically explores the road well travelled, the Canadian actress is starting to garner attention. She talked to Paul Fischer in this exclusive interview.


QUESTION: So, in the world of movies, why did this film speak to you?

BROOKE NEVIN: You know, Sherman's Way has such a great story, I think, for young people - but for anybody who's - you know, we all find ourselves on a path in life, that because of an obstacle or some unexpected event, we find ourselves at a fork in the road. So we're forced to decide, "Okay, what's next? What do I really want to do with my life?" And I think that that movie speaks to that. Of just kind of throwing caution to the wind, and deciding to do what excites you, instead of what you feel you have a responsibility to do, which may not be the best advice, but - kind of a carefree look at what would happen if you just followed your impulse. And the characters you meet along the way.


QUESTION: What do you think about this character you play? What is your best take on her?

BROOKE NEVIN: My best take on Addy? I love Addy, because she's just a ball of impulsive energy, and a light-hearted inclusiveness. And she just is quirky, in that whatever hits her fancy, she'll do. And she's certainly worn many hats in her lifetime. She's got lots of adventures. I kind of felt like on the page, the character of Addy had even so many more stories that didn't end up in the movie, so she was a delight to bring to the screen.


QUESTION: Is there much of you in her, do you think? I mean, do you impose much of your own particular traits and personality into a character like this?

BROOKE NEVIN: Oh, let's just say that there's a part of me in every character I play, for sure. I probably strive to be more like Addy, in that I probably second-guess myself more than Addy ever would, or does. [LAUGHTER] But there's a lot of me that's like Addy. I like to have fun. I like to go on adventures, like she does. 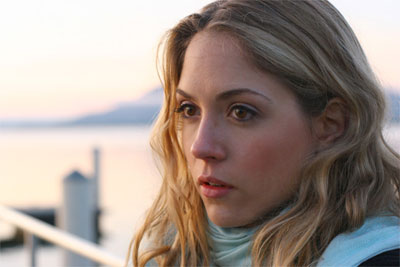 BROOKE NEVIN: I think because - and we found this doing the festival circuit, people just have a fun time watching it, you know? And it kind of succeeds in doing what I think movies set out to do which is, take you on a fun ride. And you feel kind of jaunty and fun when you leave the theater.

BROOKE NEVIN: Yes, I do hail from the Great White North.


QUESTION: What inspired you to become an actress?

BROOKE NEVIN: Oh, gosh. I think some people kind of hit it on the nose when they say, just, "It was in my blood." I think I grew up wanting to be a little performer, just from the time I was four years old, taking tap and ballet classes, and being the eager one to be on stage. I don't know. I've always been an observer of people, and I enjoy storytelling.


QUESTION: So, there was always an actress in you? Were you the class show-off?

BROOKE NEVIN: Not so much a show-off. Maybe more - I would show off with people around me that I knew would be a captive audience, like my family. [LAUGHTER] I certainly wasn't a class clown, or anything like that. In fact, in some ways, I was quite shy as a younger child, growing up. But - yeah. I think it had to do with my captive audience, and just wanting to show off in that way.


QUESTION: Did you ever anticipate turning and going from sort of the game, or the fun aspect of acting, to taking it on professionally?

BROOKE NEVIN: You know - and this kind of relates to the idea of Sherman's Way, and that fork in the road. I certainly came to a point where acting was on the side, right? I was a high school student, and it was more of a professional hobby than an actual career. And I came to a point where I had to decide, what was the next level for me? So that was a momentous decision for me. When I - you know, I left everything that I knew, and that was familiar for me, in Toronto. And then I came down and moved to Los Angeles about six years ago.


QUESTION: What kinds of challenges did you face, as a young would-be actress, trying to circumvent this city, and what it has to offer or not offer actresses?

BROOKE NEVIN: Well, I think I came down to Los Angeles with the benefit of having the really grounding presence of my family. You know, I never felt lost, or too lonely here in Los Angeles. I certainly didn't know anybody when I came down. But I had a really strong sense of purpose down here, which was to take my career to the next level, and start booking work here in the States. So I guess the challenge was just feeling not so much like that little fish in the big sea, because it's a whole different ball game, competitively, down here, of course, than in Toronto, Canada. So it was just making sure that I had my bearings, and stayed focused. 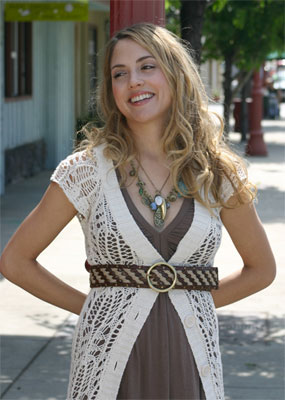 QUESTION: What are your goals as an actress? What is your ultimate ambition, do you think?

BROOKE NEVIN: Well, ultimately, I would love to flex a creative muscle in terms of storytelling behind the camera, or the inception of a script. That process. And not just have - you know, the one-act effect, where you play a character behind the camera. I would really like to be more involved in that process. But as an actor, I almost still feel green with every new project, in terms of taking on a new character. It's always such a new adventure, and I want to just continue to keep challenging myself. And hopefully I'll get to a point where - you know, it won't be such a rat race to get the next role, you know? I'd love to be at the place where scripts will start coming my way.


QUESTION: Are you very competitive?

BROOKE NEVIN: Am I competitive? You know, it depends. In different aspects of my - does it sound like I'm competitive? [LAUGHTER] Yeah, I would say I'm competitive. But not in a way that - like, that clouds my perception of reality. I know some people can get competitive to a place where they'll step on top of anyone to get where they want. I'm very grounded. And I think I'm competitive with myself. You know, I set a goal or a standard for myself, and I competitively try to attain that.


QUESTION: And what's coming up for you? I know you've done a couple of other things since Sherman's.

BROOKE NEVIN: Yes. I actually have a couple of movies that are completed and on their way into the world of being released. I did another independent movie called My Suicide, which actually just won the Crystal Bear in the Berlin film festival. I'm really proud of this movie. It brings to light a very important issue with - in society today, about teen suicides. And I think the filmmakers have succeeded in telling a story in a really compelling, unique way, that I think teens will be interested in seeing, as well as their parents.


QUESTION: Who do you play in that?

BROOKE NEVIN: I play a popular girl at school. who holds a dark secret. And she ends up, I guess, teaming up with Archie, which is an unlikely pairing. He is the loner media geek at school, who becomes a bit of a celebrity in his high school when he announces that he's going to document his suicide for his Media Arts video project.

BROOKE NEVIN: Yeah! [LAUGHTER] They call it a self-afflicted comedy. That's our tag line for the movie.

BROOKE NEVIN: I also have a movie at Icon Productions called Infestation. And t's a comedy-horror-thriller movie that takes a look at what would happen if the world were overrun by really big aliens.


QUESTION: Do you get infestated yourself?

BROOKE NEVIN: Well, that remains to be seen in the movie. I don't want to give any key plot points away. But that is certainly a thing to be avoided, for my character in the movie. But I play Sara, who is kind of an intellectual type. But she's a strong-minded girl who is trying to lead a group, a kind of motley crew of survivors, after they wake up and find that they are few left in a world overrun by proportionately big bugs. [LAUGHTER] And she butts heads with the other main character, played by Chris Marquette. Kind of our reluctant hero, Cooper.


QUESTION: I assume that a lot of the bugs weren't physically present while you were shooting.

BROOKE NEVIN: Right. We did have some mechanical on-set examples of the bugs in real life, or, to real size. But most of the effects were done digitally, in post, so, a lot of it was just pretending.


QUESTION: So, you had to rely on having a really big imagination, obviously.

BROOKE NEVIN: Oh, yeah. Yeah, it was definitely an exercise in imagination.


QUESTION: Have you auditioned or signed for anything else?

BROOKE NEVIN: Well, I am vying for all sorts of roles, including some interesting new series for networks here. It's pilot season, as they say here in Hollywood. So I'm quite the busy bee. And I'm being considered for a number of things. So I will let you know! I'll let you know.

The discord begins when Sherman, (Michael Shulman) a young, uptight Ivy- Leaguer, finds himself stranded on the West Coast with an eccentric stranger and washed-up, middle-aged former athlete Palmer (James Le Gros) in an attempt to make it down to Beverly Hills in time for a career-making internship at a prestigious law firm. The two couldn't be more incompatible. Palmer is a reckless charmer with a zest for life; Sherman is an arrogant snob with a sense of entitlement. Palmer is content reliving his past; Sherman is focused solely on his future. Neither is really living in the present. The only thing this odd couple seems to share is the refusal to accept responsibility for their lives.

Director Craig Saavedra brings his witty sensibility into this poignant look at fatherhood and friendship that features indie stalwart James Le Gros in an unapologetic performance that manages to bring undeniable charm to an otherwise abrasive character.