Dream Warrior is the fourth book in the Dream Hunter series by Sherrilyn Kenyon.

The son of Warcraft and Hate, Cratus has spent eternity battling for the ancient gods who birthed him. He is death. Now that an ancient enemy has been unleashed, Cratus's task is to destroy it. Delphine Toussaint is a philanthropist whose passion is for world peace. When a chance meeting brings her together with Cratus, the two develop a striking bond. Cratus is at first baffled by this human and her open nature...but soon he realises that Delphine is the key to completing his mission. Delphine, meanwhile, is troubled by nightmares that are starting to become a reality. The only comfort she can find is around Cratus. But she refuses to give in to war, and he refuses to lay down his arms. Yet one of them must give in, or humanity will pay the price...

How does it feel to have such international success?


Tell me a bit about the latest book in the series?

Sherrilyn Kenyon : Dream Warrior really changes the series. I have taken the Greek Mythology character Cratus, who is like a Greek sledgehammer for Zeus. The story is about Cratus and how he becomes immortal as a punishment for not killing someone.


Why do you think the Dream Hunter series has been such a big seller?

Sherrilyn Kenyon : I think it is because people like to laugh and my book has a lot of dark elements and humor in it. I guess it is like Harry Potter, people appeal to the fantastical elements of the book.


What drew you to writing?

Sherrilyn Kenyon : Oh really! I haven't heard that before! I am flattered! I have a lot of respect for Stephenie Meyer as a writer.


Do you think 150 rejections made you a stronger person and writer?

Sherrilyn Kenyon : Those 150 rejections where in one year and after I had already had six books published. I don't think they made me a stronger person or writer. I have one framed. There was one brutal letter that basically said 'no-one in this company will ever read or publish any of your work'.


Oh, I am sure they are kicking themselves now?


You have reader's queuing for hours to meet you and have their copy of your book signed, how does this make you feel?

Sherrilyn Kenyon : It is strange. I come from a large family of boys who say, "I wouldn't cross the street for you, even if you had $50 that you owed me" (laughs). The characters drive me, but I never get sick of being told that the readers 'love it'.


Sherrilyn Kenyon New York Times bestselling author Sherrilyn Kenyon has over 15 million copies of her books in print in twenty-six countries, but success didn't come easily. Over a decade ago Sherrilyn and her husband struggled to make ends meet. She was a new mother living on welfare with her husband in a tiny house, without a telephone or even space to write. The only space in the house available to write was the closet, which Sherrilyn had to resort to, hoping she would finally get the break she was hoping for. In one year she received 150 rejections. Just when she was about to give up, she sent one more letter away and finally secured her first three-book publishing deal. Ten years on and Sherrilyn is one of the world's most popular romance authors, with an international cult following of fans prepared to queue for hours at book signings in order to meet their favourite author. 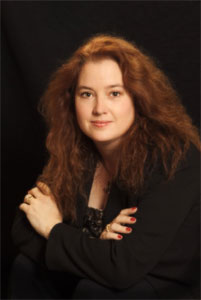