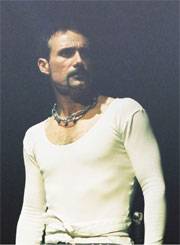 Daring to "do all that may become a man," Rising Sun Theatre's Dwayne Lawler has shocked the Japanese theatrical world with his unique version of William Shakespeare's Macbeth.

The Japan based Australian actor is to stage his production at Japan's prestigious New National Theatre in Tokyo on September 22nd. Lawler directs and plays the lead in a show that has been described as everything from sexy to outrageous. Whatever the superlatives, there is no doubting its originality.

Using what he calls his 'chameleon approach' Lawler has adapted the production to suit Japanese audiences. "Just as a chameleon changes colour to adapt to a particular environment, I've taken the same concept and applied it to the stage."

The set is a huge torii (a Shinto gate), all the actors wear hakama (skirt-like trousers) and Lady Macbeth uses a wara-ningyo (a Japanese voodoo doll) to summon evil spirits. "The key is to never stereotype your subject. That's why we don't use samurai swords."

He's even thrown in some death metal music from US band, Shakespeare In Hell. An intense and charismatic man, Lawler brazenly compares himself with the great Shakespearean actor/managers of old. "Garrick and Macready knew the value of total control of a production and the necessity to be involved in all areas. I want to mainstream Shakespeare and if I need to completely transform it to do so, then so be it. Naturally, I've upset the purists who think there is only one way to do Shakespeare, but I put my production up against anything that's out there."

Admittedly, it is unusual for a Shakespeare production to generate such attention, particularly in Japan where English language theatre is seldom appreciated. When asked his reaction to being stopped to sign autographs, Lawler says, "I am grateful that the show is appreciated. Rising Sun Theatre is in the business of pushing the boundaries and if people react positively to that, then I am happy."

Rising Sun Theatre presents William Shakespeare's Macbeth starring Dwayne Lawler and Alice Hackett at the New National Theatre, Tokyo-The Pit nntt.jac.go.jp in Shibuya-ku, Tokyo on Wednesday, September 22nd at 7:00pm. All tickets are reserved and can be purchased directly from the New National Theatre Box Office on +81-3-5352-9999 or through Ticket PIA. The website for Shakespeare In Hell is www.shakespeareinhell.com