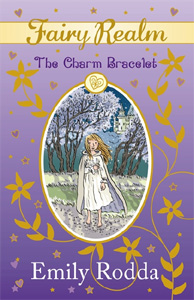 When Jessie visits her grandmother's house, Blue Moon, she discovers an amazing secret and enters the Realm for the first time.

Fairies, elves, tiny horses and all kinds of magical beings live in the Realm, and a noble Queen in a great golden palace rules them all.

But the Realm is in terrible danger, and Jessie must outwit an evil enemy to save the land before it is destroyed forever!

The Charm Bracelet is the first exciting adventure in Emily Rodda's magical Fairy Realm series - collect them all. 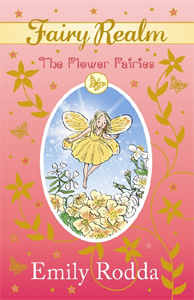 Jessie's friends from the Realm beg her to return and help them with a problem. Magic is thick in the air, and the terrifying griffins that guard the Realm's treasure house are out of control!

The tiny, beautiful flower fairies play an important part in Jessie's clever plan to stop the griffins. But then the fairies themselves fall into a new and terrible danger, and only Jessie can save them.

The Flower Fairies is the second thrilling adventure in Emily Rodda's magical Fairy Realm series - collect them all.

Jessie has helped the magic people of the Realm to escape danger twice now. But now her world is in danger.

Bushfires threaten her beloved home, Blue Moon, and only a wish-a very powerful wish-can save it. For this, Jessie needs a wish-stone, which means she must make a very treacherous journey ...

The Third Wish is the third thrilling adventure in Emily Rodda's magical Fairy Realm series - collect them all.