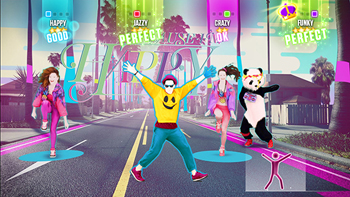 Just Dance 2015 not only features over 40 tracks, but fans will also be able to download the track 'Break Free" by Ariana Grande Ft. Zedd for free from today. For the first time since the original Just Dance game, players will dance to Australian artists with the smash hits 'She's So Perfect" by 5 Seconds of Summer and 'Black Widow" by Iggy Azalea ft. Rita Ora featured on the tracklist.

'Over the past six years, Just Dance has become the best-selling music game franchise of all time with over 50 million units sold to date," said Geoffroy Sardin, Senior Vice President of Sales and Marketing at Ubisoft, EMEA. 'This year with Just Dance 2015 we're featuring more top Billboard artists than ever before and we've worked to develop new game features that bring the community – our fans – into the game in innovative and interactive ways."

New to Just Dance 2015 is the Dance VIP feature which focuses on giving fans more access to their favourite artists and entertainers. In Dance VIP, fans can dance along to in-game footage of the VIP and compare scores with them. Players can dance along with select tracklist artists as well as dance personalities and choreographers.

For the latest information on Just Dance 2015 please visit justdancegame.com. Follow us at Twitter.com/JustDanceGame and on Instagram.com/JustDanceANZ and use the hashtag #JustDance2015.

This has to be my favourite version so far of Just Dance.  Not only can you dance with your remote, but those who are more comfortable singing can plug in U-Sing microphones and sing along, it's now an all round game.

Just Dance 2015 has great song selections, and the moves are alot more current and on trend with even some moves from artist videos which raises the bar for those who love to dance or want to learn. Great graphic effects make it perfect for parties or just hanging with friends. Another session has already been planned for tomorrow to check out more songs & improve our score.

A top pick for Christmas for sure