An Aussie project years in the making, the digital smartphone app and accompanying interactive live performance, A Galaxy of Suns, announces its premiere at Dark Mofo 2016 & the Bristol Biennial UK in September. The app, which sees constellations transcribed into musical scores with matching light displays, is the creation of Sydney visual artist Michaela Gleave and team, was released to tie in with the festival appearances.

At it's simplest, A Galaxy of Suns is a feast of astronomy meeting music, technology, light displays and visual performance. Real time star constellations have been transcribed into scores, and will be geo-tracked to the app-holder's location, so people can -play' the stars as they rise and set over 360˚ of the horizon, corresponding to wherever they are on Earth (god bless GPS data). This means art is accessible to Aussies even in the most remote corners of our country!

At the live launch of the app at Dark Mofo 2016, the project came to life with The Tasmanian Symphony Orchestra Chorus -singing' the stars, alongside lead artist Michaela Gleave, composer Amanda Cole and programmer Warren Armstrong at the helm.

The same experience will be repeated at the Bristol Biennial in September, with the Bristol Choir singing the stars and constellations above the UK.

It's a unique collaboration of contemporary art, music, astronomy, and design, that operates on a galactic scale.

How exactly does it work? Imagine this at Dark Mofo's Winter Extravaganza: 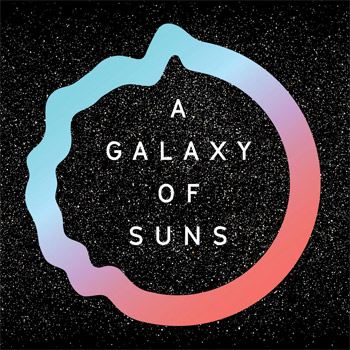 Microtonal sonic cues are delivered to thirty¬six Tasmanian Symphony Orchestra chorus members, allowing each to sing the stars live, in real¬time for the location where they stand. Sampled tuned percussion will accompany the chorus, with large¬scale lighting tracking their progress as they sing their way across the sky; the composition builds until all 360¬degrees of the horizon is represented in sound and light.

It's interactive as well - those attending the opening evening of Dark Park will be able to download the app for free, walk amongst the choir and hear the sounds of rising and falling stars that correspond with where they stand.

It looks astonishing, it sounds phenomenal, and with advising astronomer Dr Michael Fitzgerald on board, and Michaela's background as a former artist in residence with the CSIRO, it's technologically and astronomically spot on as well.

It's a creative interpretation of science, a celebration of beauty and wonder of our natural environment, and it's accessible to all – city or country dwellers, regional or major. Offering art at your fingertips and a peek into the magic of our beautiful star system, the digital smartphone app A Galaxy of Suns will be released in Australia late June, followed by a September international release.

Question: How would you explain the launch at Dark Park at Dark Mofo?

Michaela Gleave: To launch Dark Mofo I developed a 36-part choir performance, in collaboration with composer Amanda Cole and programmer Warren Armstrong, in which singers from the Tasmanian Symphony Orchestra Chorus -sung' the stars live across 360 degrees of the horizon, for the exact time and location of the performance. The choristers received microtonal audio cues through their smart phones, allowing them to sing in real time. The chorus were dressed in full-length liquid silver capes, and individually lit to reflect the actual colour of each star being sung. The work was presented at dusk, the colours growing more intense as the sky darkened, before the finale of the piece when big searchlights swung up into the sky to meet the stars. It's was very ethereal experience, looking and sounding beautiful, so I'm very grateful to have had this context to premiere the work.


Question: Can you tell us about A Galaxy Of Suns?

Michaela Gleave: At the centre of A Galaxy of Suns is a custom computer program that tracks the rotation of the Earth in relation to the stars. Astronomical coding connects the program to the Hipparchos stellar catalogue, a high-precision data set containing over 18,000 stars. When the program receives time and location coordinates it -plays' the stars for that precise location in time and space.

This program has been translated in the choir composition, but also into a general release self-generating music app. The app works with the GPS data automatically collected by smart phones to create one-off compositions for each audience member, any where on the surface of the planet. The rhythm of the composition are driven purely by the timing of the stars as they pass over the horizon, and the pitch is determined by the colour ID of the star, which is an indication of size, age and chemical composition. Rapidly burning, hot, young, blue stars correspond to the upper registers and the slow burning, cooler, old, red stars to bass notes. Panning is accurate to the location on the horizon, with the app accessing the inbuilt compass in your phone to allow you to selectively -play' certain parts of the sky simply by pointing your phone in that direction. The colour of each star is reflected in the visuals, along with the brightness and distance the star is away from us. A number of in-app settings allow you to customise the composition. You can select only rising or setting stars for example, to alter the tonality of the notes played, or you can adjust the density of the work, creating a very active composition that listens to the full 360 degrees of the horizon, or a quieter one by selection just a small slice of the sky. The stars are also selectable by whether or not they are visible to the naked eye, or how far away they are from Earth. Data about each of the stars played appears on the screen, detailing its name or catalogue number, the constellation in which it appears, it's distance and magnitude, and whereabouts in the sky is it.


Question: What inspired this project?

Michaela Gleave: I have been making art that references astronomy for a number of years. I'm interested in creating work that explores the edges of human experience, whether that be conceptually or physically, and so reaching beyond the confines of Earth's atmosphere to connect to the stars has been a natural progression for me.

In 2012/13 I spent a number of months working at CSIRO Astronomy and Space Science as their artist in residence. I learnt a lot during this period. Astronomy is, needless to say, an enormous field, and it was quite humbling to discover how little we know about the universe. Perhaps the most important part of this experience, however, was the realisation that ultimately all this research is just about our selves: it remains limited by our particular view point here on planet Earth, and its purpose is ultimately about finding meaning for our selves.

With this project I was hoping to connect audience in a tangible, very real way to the mechanics of the cosmos. Both in appreciation of the beauty and magnificence of the galaxy around us, but also as a celebration of the very special position in space and time that we occupy, here on planet Earth. 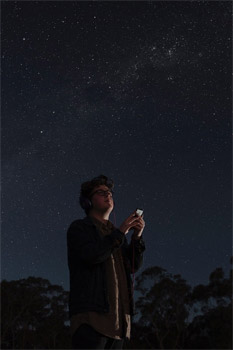 Question: How long have you been working on A Galaxy of Suns?

Michaela Gleave: The idea for A Galaxy of Suns has been in the pipeline for nearly two years. The starting point was a previous work of mine, The World Arrives at Night (Star Printer), which is a dot matric printer that prints out the details of one star every minute, in real time, of stars rising over the horizon, in real time for the location of the object. I posted a picture of this work on social media, and the composer Amanda Cole pounced on the image, saying that if I sent her the files she could translate them into sound. The idea escalated very quickly, with the help of programmer Warren Armstrong, into a smart phone app and subsequently the performance. We've also generated some beautiful images from the computer program, creating visual star maps instead of sonic ones, so it's very a very rich and reward project to be working on.


Question: What are you looking forward to most about performing with the Tasmanian Symphony Orchestra?

Michaela Gleave: Working with the TSO Chorus has been a wonderful part of this project. The voice is such a beautiful instrument, and the chorus has been very generous with their time and enthusiasm for the project. We were fortunate that they were available for this project, and I look forward to hopefully working with them again in the future. I have a background in classical music, but this is the first time I've worked with musicians as part of an artwork, so it's been a lovely experience for me. The project was quite a different one for the chorus - there was no score, no conductor, no real capacity to rehearse, with their notes coming instead directly from the stars - and I think it has been a mutually enjoyable journey for all of us.


Question: What inspires you?

Michaela Gleave: I'm inspired by the beauty, complexity and infinite nature of the natural world and universe beyond. I'm also inspired by knowledge, and the glimpses behind the fabric of reality one gets every now and then. In my work I seek to channel moments of expansion, when you discover or see something that catapults the scope of your understanding into realms you couldn't previously imagine. There is often a lot of research and layers of private meaning behind my work, but the outcomes are purposefully distilled into something universal, aiming to reach audiences in a core or fundamental way, maintaining a level ambiguity to open opportunities for self-reflection and further thinking.


Question: How can Australians get involved?

Michaela Gleave: A Galaxy of Suns the app has its general Australian release on June 21, so local audiences will be able to download the app then. Once downloaded the app doesn't require internet or network access to operate, making it a project easily accessibly to audiences in remote or rural Australia, with each composition generated being unique to the user's particular location in space and time. I really wanted this project to be accessible to people outside of major cultural centres who might not ordinarily access contemporary art and compositon , and with 6.1 billion people predicted to have a smart phone globally by 2020 I'm hoping it will be!


Question: What's next for A Galaxy of Suns?

Michaela Gleave: In September we're taking the project to the Bristol Biennial in the UK where the international launch is taking place. The presentation I'm planning will be quite different, so I'm very much looking forward to seeing the work realised in a different context.