Life with my Sister Madonna 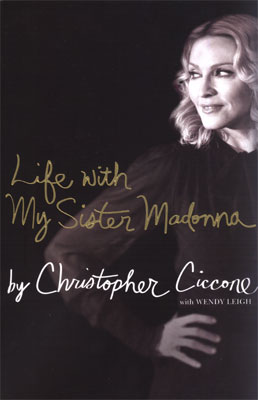 You knew it was coming

This is the Madonna you never knew

From the insider who's seen it all


Christopher Ciccone's extraordinary memoir is based on his forty-seven years of growing up with, working with, and understanding the most famous woman of our time... Madonna, who has intrigued, scandalized, and entertained millions for half a century.

Through most of the iconic star's kaleidoscopic career, Christopher Ciccone played an important role in her life: as her backup dancer, her personal assistant, her dresser, her decorator, her art director, her tour director.

If you think you know everything there is to know about Madonna, you are wrong. Only Christopher Ciccone can tell the full scale, riveting untold story behind Madonna's carefully constructed mythology, and the real woman behind the glittering facade.

From their shared Michigan childhood, which Madonna transcended, then whisked Christopher to Manhattan with her in the early eighties, where he slept on her roach-infested floor and danced with her in clubs all over town - Christopher was with her every step of the way, experiencing her firsthand in all her incarnations. The spoiled daddy's girl, the punk drummer, the raunchy Boy Toy, Material Girl, Mrs Sean Penn, Warren Beatty's glamorous Hollywood paramour, loving mother, Mrs. Guy Richie, English Grand Dame - Christopher witnessed and understood all of them, as his own life was inexorably entwined with that of his chameleon sister.

He tangled with a cast of characters from artist Jean-Michel Basquiat, to Gwyneth Paltrow, Kate Moss, Demi Moore and of course Guy Richie, whose advent in Madonna's life splintered the loving relationship Christopher Ciccone once had with her.

The mirror image of his legendary sister, with his acid Ciccone tongue, Christopher pulls no punches as he tells his astonishing story.

Life with My Sister Madonna is the juicy, can't put it down story you've always wanted to hear, as told by Madonna's younger brother.

Christopher on Guy Richie and helping him decorate Roxbury:
"I show him twelve samples and he tells me that they all look like 'twee.' He uses the word over and over, and I get the message: I am gay and he doesn't want the house to reflect my sexuality, which is hardly likely. Perhaps to safeguard the entire interior of the house from becoming contaminated by my homosexuality, he has h is assistant decorate his office..."

Christopher on Madonna's adoption:
"I respect that Madonna is trying to help a young child from an impoverished third-world country. But the cynic in me reads about the publicists and the camera crew who traveled with her and Guy on their first visit to the orphanage and - remembering Truth or Dare - can't help thinking, Madonna is competing with Angelina Jolie. So she isn't going to stop with one child, she is going to help an entire country, and she wants the world to know about it."

Christopher on the role of Kabbalah in his sister's life:
"I believe that Kabbalah is helping keep Guy and Madonna together. No matter how much I dislike him, how much I hold him responsible for the rift between me and my sister, I wish him and their marriage well."

Christopher on what he has learnt from Madonna:
"My lifetime with Madonna has yielded many lessons for me. The prosaic lesson that if you do business with a family member, no matter how close you are - always get a contract."

Christopher Ciccone began his professional career as a dancer with La Groupe de La Place Royal in Ottawa. He art directed Madonna's Blond Ambition tour and directed her The Girlie Show tour. He has directed music videos for Dolly Parton and Tony Bennett. He is an artist, interior decorator, and designer in New York, Miami and Los Angeles.

Review: A real page turner. The price of fame is high and takes a certain type to withstand the media. 'Life with my Sister Madonna' shines a 'ray of light on the real Madonna and insight into Hollywood & fame. Couldn't put it down.