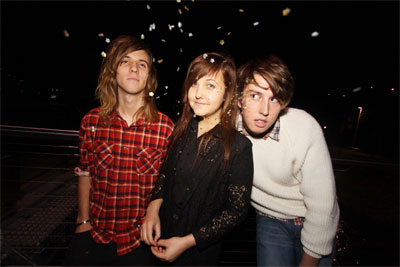 StoneMason have announced The Stand Straight, Straight Face Tour, hitting all major East Coast cities in a run of over 18 and all ages shows (including a special acoustic in-store performance for Melbourne at Fist2Face), this July and August.

'Noise + Haste' integrates a unique combination of fast-paced indie rock, hook-laden pop punk and piano driven balladry. The five-track EP was recorded, engineered and mixed by Luke Palmer and Matt Bartlem (The Butterfly Effect, Dead Letter Circus), and mastered in the US by Troy Glessner (Underoath, Anberlin, Haste The Day). StoneMason's sound has been described as 'pop-punk at its best' (KillYourStereo.com), in sounding like a mix of Avril Lavigne, Paramore and Ellie Goulding with traces of Blink 182 and All Time Low.

Forming in 2005 while members of the band were still tackling highschool, StoneMason consists of Phoebe Parkinson, 18 (vocals and keys), John Beynon, 19 (guitar), Thomas Stevens, 19 (bass), and Ant Vallone, 19 who will round out the lineup as StoneMason's tour drummer, due to the recent departure of their original drummer, Joel Crapper.

Review:StoneMason are a group of mature and extremely talented musicians that are able to engage their audiences with energetic music and wonderful vocals. StoneMason are showcasing a new genre of hip-pop-rock that will appeal to teenagers like Blink 182 did.

From listing to the debut EP you know that StneMason is the band to see live. Whilst listening to Noise + Haste it is impossible to sit still; StoneMason's music makes you move.