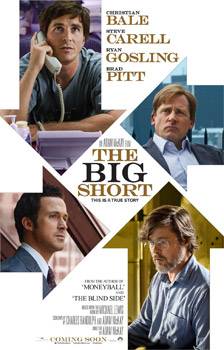 Synopsis: When four outsiders saw what the big banks, media and government refused to, the global collapse of the economy, they had an idea: The Big Short. Their bold investment leads them into the dark underbelly of modern banking where they must question everyone and everything. Based on the true story and best-selling book by Michael Lewis (The Blind Side, Moneyball), and directed by Adam Mckay (Anchorman, Step Brothers).

Now that the ever-entrepreneurial Gru has left behind a life of super crime to raise Margo, Edith and Agnes,...

Always unassuming, Steve Carell may get used to playing boorish characters, such as the sexist boss on TV's hit...

The intrepid Edmund and Lucy return to Narnia - with their beastly cousin Eustace in tow - on the ship The Dawn...