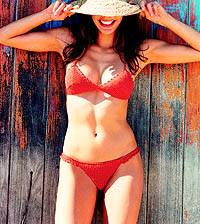 A cult of pain has swept the Western World over the last few years. It's led by women in white coats waving hot spatulas of wax unsettlingly close to those bits your mother might not have told you about.

If you're wearing mascara, you might want to close this page down immediately as it may cause the eyes to water.

The Brazilian bikini wax is a hair free alternative for women who can endure excruciating pain. Gwyneth's done it, so has Naomi. It is now so popular that BW (brazilian wax) salons have sprouted right around the world.

The Brazilian Wax involves the spreading of hot wax on to the buttocks. A cloth is patted over the wax, then rrrrip. That's nothing compared to the next bit. Wax is smeared onto the mons, the cloth is pressed into place...then they turn the music up loud...rrripppp. It's quite normal for the waxer to throw your legs over their shoulder, or ask you to moon them so they can get the strays. The waxer then goes over your more sensitive bits with a pair of tweezers to pluck out recalcitrant strands.

Only a small exclamation mark of hair is left to curtain-off the labia. It's not the most dignifying experience, but will definitely ensure you are hairless.

Waxing lasts for around one to two months before stubble appears, unlike shaving which will have you scratching like a brown dog within 2 hours. You may get the itches and ingrown hairs, but generally it's a fairly safe procedure.

But don't be tempted to do the FBW (full body wax) at home. Spend the money and get a professional waxer to do it.