Introducing Australian musician CARINDA CHRISTIE who has a repertoire of diverse energetic originals ranging from folk and pop through to rock. Playing guitar, piano, writing poetry and singing as a youngster she dreamed of entertaining. At nineteen she picked up her brother's guitar and starting singing professionally and has never looked back since!

Describe Yourself In 3 Words: Happy, talkative and bubbly.
Best Feature: Voice
Worst Feature: Nose
Person You Would Most Like To Meet: Joan Armatrading
Hobbies/Interests: Cooking, going to the movies and hanging out with my dogs.

First Job: Working in a fish & chip shop part time, fulltime Florist Shop.
A Talent You Wish You Had: Artist - painting
The Best Advice Given To You: A bird in the hand is worth two in the bush.
What Can You Never Leave Home Without: Work Diary and Mobile phone.
If you were a cartoon character, which one would you be? Tweety Bird.
If you were told you had a minute to live, what would you do? Pray.

Location: Cairns, Australia. I am touring nationally at present.

Music Genre: My music is very Individual and hard to put into categories. The main styles present in my music are pop, folk, rock and blues.

When did you realise that music was your passion?

Ever since I can remember. When I was three I was twinkling the ivories on the piano, and when I was eight I was playing guitar. From as long as I can remember I was singing. The whole works in hairbrushes, combs, whatever I thought was good enough for a microphone. Both my parents were musicians and so were their parents.

How many years have you been performing? I have been a professional Muso for around 10 years and have just gone solo this year.

Do you write your own material?

I do write all my own songs. I have three albums out and am going for the fourth. My inspiration I would have to say is LIFE in general. Love, addiction, animals, friends, and pain... well you get my drift.

Have you found the Internet to be helpful/useful in fast-tracking your music career?

Yes I have been able to send my website to people, whether it be a venue, interview or a fan wanting to know more. 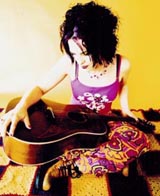 In following your dream, who has helped you along the way?

My husband, family and friends would be the people who have sacrificed the most for me. But you also get people who believe in you because they love your music or the way you entertain.

Is there anything you wish you could change about the music industry?

Yes, I wish it wasn't so influenced by MONEY, yes the dirty word. In my view what happens is they (the record labels) start changing artists because they think it would sell, and of course it will because they have already brainwashed the majority. Don't get me wrong there are some great artists that have got through with their music and kept it the same but they, the true artists have also been ripped off and left with nothing after giving their life to what they believe will give them a happy retirement fund. SO the question sometimes is, is it fame or fortune or are you one of the lucky ones who will get both in the long run? What I would also like to say is I wish the Labels would give some Indie Artists a chance. Now Australia was starting to do this a few years ago but it seems to have dropped off of late.

What advice can you offer to other budding young artists?

Have a strategy; know where you are going and what you are doing. Play as much as you can at first to live audiences to gain experience, there is nothing like playing in front of a live audience. Learn your trade well; don't think oh I can sing I don't need training. OH so wrong! How many great singers have eventually had training because they have nearly destroyed their voices? Why not have the upper hand and do it at the beginning of your career. Take a business course, as you are the only one who will be true to yourself when it comes to money.

Where do you envision yourself in 5 years time?

Hopefully still touring and playing to audiences 1000 times as big, with 1000's of people on my mailing list and buying 1000's of my albums.

Where can people purchase/listen to your music?

Record stores Australia wide, they would have to order them, as they are not on the shelves as I am an Indie artist. And through my website http://www.carindachristie.com and at shows.


N.B.: If you would like to nominate a Star of Tomorrow, email michelle@girl.com.au, include a brief biography of the person you are nominating and tell us why they are the next big thing!