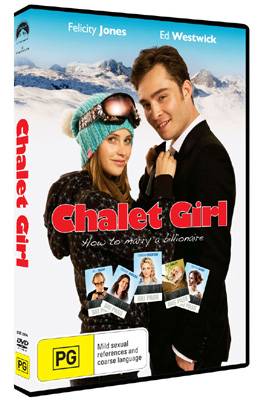 How to Marry a Billionaire

Kim, a pretty tomboy from the suburbs of London, gives up skateboarding after being involved in a fatal crash that kills her mother. In order to support her father, Kim takes on a job as a chalet girl to a rich family where she is immersed in an unfamiliar world of wealth and partying.

To make things worse, she then falls for her boss's charming son Johnny (Ed Westwick), making for an awkward love triangle with Johnny's girlfriend Chloe.

To escape, Kim takes to the slopes and teaches herself to snowboard, slowly confronting her fears of jumping and the death of her mother.

Not breaking away from tradition of 'rom-com', Kim not only wins the resorts's snowboarding competition, but also that of Johnny's heart.

"Easy night inn, with some great skiing, boarding and of course romance. Warm your heart with this delightful movie about moving on and second chances." - Girl.com.au