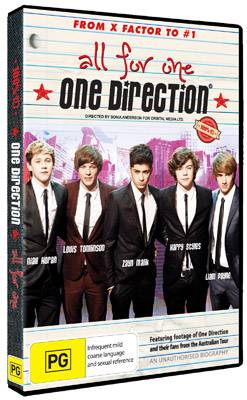 To describe One Direction as the hottest boy-band on the planet is an understatement. ON FIRE is closer to the mark. Their story is quite remarkable – from X Factor losers to global pop domination – in less than a year.

Handsome, harmony-singing and choreographed with military precision, the fab five have taken the music world by storm. What is unprecedented about their meteoric take-over is the sheer magnitude of their triumph. The teen sensations' popularity has escalated to levels of such enormity that they've made history in America, scorched sales charts worldwide and been dubbed as the new Beatles. In 2010 they were unknown schoolboys desperate for a shot at fame on Britain's X Factor and, despite finishing third, rapidly graduated to arena stardom as their super-catchy debut single, -What Makes You Beautiful,' became the most pre-ordered download in Sony Records' history.

After storming the UK charts in 2011, 1D's career-defining album, -Up All Night', crushed all competition by shooting straight to No.1 in the US – making 1D the first UK group in history to reach the top spot in the US with a debut album. The future for 1D is bright – these boys are at the top – and that is where they're set to stay. Meet the world's newest teen idols, as you've never known them before. This is their remarkable story. An absolute must-see for any 1D fan, this documentary is jam-packed with explosive behind-the-scenes footage and back stage interviews; it's got everything you need to know about Harry, Niall, Liam, Zayn and Louis.

Special Features:
Official interviews with One Direction band members
Live performances in London and New York
An early unseen performance of Harry Styles, 1D lead singer, when he was a vocalist with White Eskimos
Celebrity interviews with boy-bands Big Time Rush, Mindless Behaviour and Westlife, plus Simon Cowell, Cheryl Cole and more
Interviews with close friends and family
Footage of the boys in Australia, the USA and across Europe