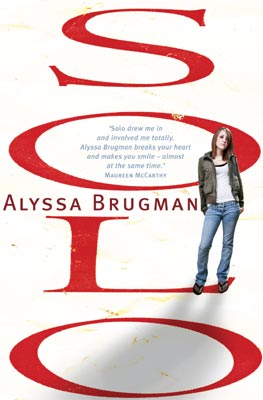 Mackenzie is a good liar. She has to be - especially to herself.

Alone at night in the bush, alone with her demons - what will this city girl discover about herself and her place in the world? An intense story of psychological struggle, from an acclaimed writer of YA fiction.

Mackenzie has had a tough life. Aa a teenage daughter of drug-damaged parents, she has little reason to trust other people, or even herself.

After yet another violent outburst, she is sent to Wilderness camp - 24 hours alone in the Australian bush - to confront her past, her family and her demons - not least the terrifying Red Man.

As she defiantly stuggles to peel back the layers of self-deception, what will this city girl discover about herself and her place in the world?

'Solo drew me in, and involved me totally. Alyssa Brugman breaks your heart and makes you smile - almost at the same time.' Maureen McCarthy

'Mackenzie's voice is tough, but poignant too. You want to hang around to the very last word to make sure she's okay.' Melina Marchetta

I thought about Callum first. I imagined his face from every angle. Him smiling at me over some shared joke, one that I'd instigated, shocking him into a delighted laugh - tipping the balance in my favour just for an instant.

Then ugly, perverse thoughts barged in like bullies. All those thoughts I'd pushed aside, dammed, saw their opportunity to attack with renewed vigour. Out here there wasn't a thing to distract me. That was the whole idea of going solo, wasn't it? I wondered if isolation could send you mad. But I was already nutty, so maybe it would send me sane.

After yet another outburst, Mackenzie is sent to a Wilderness camp - 24 hours alone in the Australian bush - to confront her past, her family and her demons. That's when things start to unravel. . .

About the Author:
Solo is Alyssa Brugman's eighth novel. Alyssa's previous books Finding Grace, Walking Naked, Being Bindy, For Sale and Swap, Beginner's Luck, Hot Potato and Hide and Seek are distributed around the world and have been shortlisted for numerous literature and children's choice awards in Australia and overseas.

She lives in the Hunter Valley with her partner and their seven horses. Alyssa writes full time.