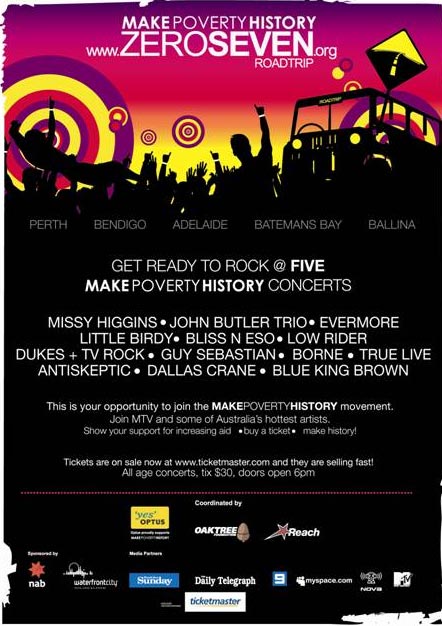 The ZEROSEVEN Roadtrip was kicked off today with the unveiling of concert locations and line-ups at the official media launch in Melbourne this morning.

Concerts will be held in Perth, Adelaide, Bendigo, Byron Bay, Bateman's Bay & Sydney. Melbourne won't be missing out though, with a special send off planned to start the Roadtrip.

Tickets to the Sydney event will be available through special promotion only.

Speaking at the media launch, Hugh Evans, 2004 Young Australian of the Year and Director of the Oaktree Foundation, said the Road Trip will be an invaluable opportunity for young Australians to stand up for what they believe in.

"The commitment, passion and energy of our Ambassadors will be truly powerful. We want to encourage all Australians to face up to the global challenge of making poverty history" says Evans.

"ZEROSEVEN will be the ultimate Roadtrip. It is a once-in-a lifetime opportunity for young Australians to journey across the country with Australia's biggest bands and to face up to poverty," continues Emeli Paulo of the Reach Foundation.

The MAKEPOVERTYHISTORY ZEROSEVEN Roadtrip aims to raise awareness of extreme poverty and encourage the Australian Government to increase Australia's foreign aid contribution to 0.7% of GNI by 2015.

The MAKEPOVERTYHISTORY ZEROSEVEN Roadtrip is made possible through the generous support of Optus.

Optus and MAKEPOVERTYHISTORY have today launched Australia's biggest 'face petition', Face Up to Poverty. While everyone may not be able to attend a Concert, all Australians can pledge their support by saying 'yes' to Face Up to Poverty by sending a Multimedia Message (MMS) of their face to 0447 33 FACE (0447 33 3223) or by uploading their photo at www.optus.com.au/faceup

The MAKEPOVERTYHISTORY ZEROSEVEN Roadtrip is taking place across Australia from the Sunday 1 July 2007 to Sunday 8 July 2007.

Youth ambassadors (aged 16-25) will depart major capital cities on Sunday 1 July 2007. All roadtrips, with the exception of the Western Australian trip, will converge on Sydney on July 6 2007. A celebration on Friday 6 July will be held at the Sydney Opera House.

July 7 2007 is the International Day for the Elimination of Poverty and the halfway point to achieving the Millennium Development Goals (MDGs) - 07/07/07. Youth ambassadors will attend a MDGs summit on Saturday 7 July.

Youth ambassadors will begin the journey home on Sunday 8 July.

A child dies every three seconds from preventable causes
Preventable deaths in Africa are occurring at a rate equivalent to the death toll of the Asian Tsunami every two weeks
A parking metre earns more in an hour than 70% of the world's population does in a day
A cow living in the European Union lives on more money than half the world's population
Around US%50-70 billion per year is needed to achieve the MDGs and eradicate extreme poverty - this may sound like a lot but each year US$900 billion is spent on defence worldwide
Achieving the MDGs would lift at least 500 million people out of poverty
Each year many developing countries spend more on debt service repayments than they receive in aid
In Uganda, debt relief led to 2.2 million people gaining access to water
30,000 children die every day because of extreme poverty
500,000 children under 5 years of age will die this year in South East Asia and the Pacific
$3 provides an East Timorese child with one year of primary education
More than $1 billion people around the world live on less than US$1 a day
800 million people go to bed hungry every night
Australia's aid budge will be $4 billion 2010. Each year Australians lose around $17 billion in gambling (2005 figures) - an average of $21 per week per adult
121 million children worldwide will not finish primary school education
1.2 billion children live in abject poverty
Every year, Australians spend more than $147 million on alcohol, $71 million on cigarettes, $42 million on gambling and $17.7 million on confectionary - 1998/1999 figures.

Hugh is currently studying Law/Science at Monash University in Melbourne. He has recently founded a young leaders training organization called GEL (Global Emerging Leaders), and upon completing his Australian degree he hopes to undertake further study abroad in the area of economics.

In the future, Hugh aims to continue to make a huge difference in Australia and around the world. He hopes to see Australia become a nation renowned for its vision and generosity in both the domestic and global arenas.

The Oaktree Foundation aims to empower developing communities through education in a way that is sustainable, and is run entirely by young people under the age of 26.

Along with Hugh Evans and Emeli Paulo, Viv is coordinating the Zero Seven Road Trip, which is set to take place across Australia in July this year.

Viv currently sits on the core committee of Make Poverty History. As a first time voter, she is by far the youngest member on the committee.

Viv's dedication to combating global poverty and injustice took flight when she was 14 years old and began working at the office of Amnesty International Australia coordinating the student advocacy network.

At 15 years old, Viv Benjamin began running Melbourne-based youth organisation Bombs Begone, which raises funds to clear landmines in Cambodia and other affected regions. Viv has been a guest speaker at schools and conferences around the country on the issue of anti-personnel landmines, and has just recently returned from spending time in Cambodia where she saw the impact of landmines first hand.

At 16 years old, Viv was selected to be a delegate representing Victoria at the UN National Youth Conference, and later that year was elected to the executive of the United Nations Youth Association, where she held the positions of Victorian Policy Officer, and National Campaign Director.

Viv finished Year 12 last year, where she was a College Prefect at her school and achieved an ENTER of 99. After two months overseas in Vietnam and The Philippines, Viv is now volunteering full time at The Oaktree Foundation, having deferred her Law and Arts degree at Monash University in Melbourne.

She will be commencing her degree in second semester of 2007.

Emeli Paulo has a unique and inspiring passion for life. Her authenticity, affability and skill to create environments of intimacy and honesty make her one of Reach's most engaging and popular young Facilitators and presenters.

Emeli, 25, was born in Melbourne and is the youngest of four children. The daughter of an Australian Mother and Polynesian Father, Emeli embodies the rich multiculturalism that makes up Australia today.

Emeli's introduction to Reach was a real eye-opener. At that time she was in year 12 and struggling at school and at home.

"I just didn't care about anything," Emeli says. "My Mum had cancer at the time and I basically refused to engage. I was in denial about what was happening in my life and in real danger of entering into some truly destructive behaviour."

At that moment she recalls making a definitive commitment to herself to face up to the truth. Since then she has courageously initiated a quest to gain personal knowledge and growth. Through this exploration Emeli made a decision to dedicate her life to contributing to the lives of young people in a positive way.

In 2002 and 2003, Emeli travelled overseas to work as a facilitator at Camp America and a youth leader in the grottos of Belfast and ghettos of New York. She reflects that this experience was one of the most challenging and fulfilling of her life.

Emeli has now been with Reach for nearly a decade and is one of the original Reach 'crew'. During this time Emeli has personally worked with over 60,000 young people as the Senior Facilitator for Reach programs, and recently the host of the Reach/ Australian Idol workshop.

Due to her strong commitment and knowledge, Emeli has now been employed to help Reach ensure each of its programs retain the fundamental Reach essence and philosophy.

Along with another of Reach's Senior Facilitators, Elise Klein, Emeli has developed an exciting new program, Flame, and begun working with indigenous young women. She also passionately facilitates Reach's 'girls only' Birdcage program, aimed at deconstructing gender identity and helping young women feel positive about how they look and who they are.

In early 2005 Emeli was one of the first people her friend Trisha Broadbridge called upon to be with her in the wake of the Boxing Day Tsunami and to assist in the effort to locate Trisha's husband, Troy. Emeli travelled to be by Trisha's side immediately. In November 2005 she was a significant contributor in erecting the Broadbridge Education Centre on Phi Phi Island.

Emeli's personal journey is one comprising experiences of loss and hardship, as well as triumph over adversity. Emeli's story is encouraging, particularly because, as Emeli describes herself, she is "simply an ordinary person attempting to do inspiring things."