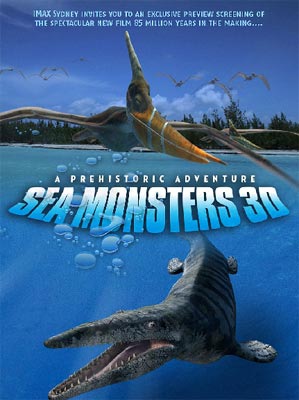 National Geographic's new film "Sea Monsters 3D: A Prehistoric Adventure," opening at IMAX Sydney on September 27, brings to life the extraordinary marine reptiles of the dinosaur age to the world's biggest screen in the explosive 3D IMAX format. The film will open for an exclusive engagement only at IMAX theatre around the globe.

Narrated by Tony Award-winning actor Liev Schreiber and with an original score by longtime musical collaborators Richard Evans, David Rhodes and Peter Gabriel, "Sea Monsters 3D" takes audiences on a remarkable journey into the relatively unexplored world of the "other dinosaurs," those reptiles that lived beneath the water.

"This is the first IMAX film about what lived in the water during the dinosaur age," said producer Lisa Truitt, "Sea Monsters: A Prehistoric Adventure. "It is perfect subject matter for such an immersive format, one that allows these giants to literally swim off the screen and directly into the audience."

The Cretaceous world was very different from the Earth we know. Eighty million years ago, places such as Kansas were at the bottom of a great inland sea that divided North America in two. A warmer climate meant more of the globe was submerged - Europe was just a smattering of islands, much of Asia was underwater and a shallow ocean engulfed nearly all of Australia. On this sodden sphere, cold-blooded seagoing reptiles flourished, and as these ocean giants died, their skeletons were left in locations that are now high and dry.

"Sea Monsters 3D: A Prehistoric Adventure" weaves together spectacular photorealistic animation with standout finds from paleontological digs around the world - treasures that shed light on the film's incredible cast of characters.

The film follows a family of Dolichorhynchops, also known informally as "Dollies," as they traverse ancient waters populated with saber-toothed fish, prehistoric sharks and giant squid. On their journey the Dollies encounter other extraordinary sea creatures: lizard-like reptiles called Platecarpus that swallowed their prey whole like snakes; Styxosaurus with necks nearly 20 feet long and paddle-like fins as large as an adult human; and at the top of the food chain, the monstrous Tylosaurus, a predator with no enemies.

"The sea monsters are beautiful in the sense that they evolved to perfectly fit a role in their environment, and it is wondrous to think that such things really existed, swimming and hunting in seas that cover what are now the corn fields of the US midwest," says Truitt. "We're excited that audiences will now be able to swim with them without ever getting wet!"

For more information on the film please visit - http://www.nationalgeographic.com/seamonsters/