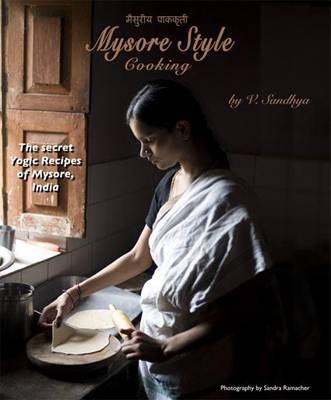 Mysore Style Cooking is a unique Indian cookbook straight from one of the humblest culinary experts of Mysore, India, Ms. V. Sandhya.

This is Vegetarian Indian food as you will never find it in the commercial Indian restaurants present in our cities. Sandhya draws from generations of knowledge, passed down by her family, to bring to the world recipes that are Ayurvedically balanced and delicious in flavour.

Recipes range from Uppittu and Dosa (eaten mostly for Breakfast) through to Palyas, Curries, Sambal, Chutneys and Raitas, as well as sweet dishes such as Pongals and Rasayanas.

We expect these 'secret' recipes to be complicated and mysterious, only to discover that they are simple to prepare and full of flavour.

Mysore Style Cooking includes over 60 of these much treasured recipes as well as over 70 full page colour images, interspersed with personal stories and images of life in Mysore.

If you ever wanted to know what Indian people eat at home, rather than the fare served at commercial restaurants, than Mysore Style Cooking will provide you with the secrets to those recipes.

Sandra is the publisher and photographer of Mysore Style Cooking.

Question: What is Mysore Style Cooking?

Sandra Ramacher: Mysore Style Cooking in itself is quite unique to South India. Each area in India has a different style of cooking and that has a lot to do with what local fruit and vegetables are available and what is seasonal. It also has a great deal to do with religious practices because food is very important when it comes to particular religious festivals and food is specially prepared for each religious festival.

Each family has particular ways of preparing food; families develop their own secret recipes on how to produce certain spices and how to spice their curries. Sandhya's cookbook is very much about what she's been handed down by generations of cooks in her family and she has ended up refining the whole thing through Ayurveda because her Grandfather was an Ayurvedic doctor. Sandhya then started to cater towards Western Yogis and therefore she has reduced the spiciness of the food to be more suitable for the Yogic body and Yogic practice.


Question: What inspired you to publish the Mysore Style Cooking cookbook?

Sandra Ramacher: I go to Mysore quite often because I practice Ashtanga Yoga and Mysore is famous for Pattabhi Jois who is the father of Ashtanga Yoga, he practices out of Mysore which is why I go there. Sandhya was one of his students as well and she learned some of the cooking practices through him and his wife. When I went to Mysore the first time I was taken to Sandhya's place and she cooked out of her house and people arrived at her house and sat in the backyard or in one of the lounge areas where she'd put up a big table and several chairs; when you'd sit down the girls would bring out food, one after the other and you'd eat as much as you could.

In India everybody cooks on the floor and all these girls would be sitting around on the floor making Curries, Playas or whatever it is that they're making. Everything is cooked fresh because there are no fridges in India, in India most people do not have fridges, they just buy their food on a daily basis and they cook what they are going to consume for the day.


Question: Do you have a favourite Mysore recipe?

Sandra Ramacher: Sandhya has a soup in her book that is called Sandhya's Soup and it is made with one of Sandhya's secret ingredients which is a Sambar Powder and even though you can go and buy Sambar Powder at an Indian grocery store, in India each family has their own version of Sambar Powder. Sandhya has her own version of this Sambar Powder and this soup is one of the easiest things to make but it is one of those soups that has a really nourish flavour that you could eat three times a day and really not crave anything else. The soup is definitely on of my favourites.

Some of the desserts are really nice too; I absolutely love Dosa, which is a fermented rice pancake. The recipe is in the book. It takes several days to make the Dosa because you have to get certain kinds of rice, there is about three or four different types of rice and they have to be fermented in spring water and left out in the open. Usually you try and keep them near plants because the plants have bacteria that get into the fermenting rice and helps to break down the rice molecule. Then you grind it all and turn it into a batter that you leave sit for another eight hours to ferment further. Then, you make these rice pancakes that are beautiful, you can have them with savouries or with jam - they're just great!


Question: How does Mysore style cooking differ from what we eat in Indian restaurants?

Sandra Ramacher: I order quite a bit of Indian food here and generally everything has a thick paste sauce with it or it is deep fried in batter and it amazes me. Mysore style cooking is very clean cooking and there is not a thick gravy paste and the vegetables tend to be cooked separately; you can have Pumpkin Palyas or Potato Palyas or even Green Bean Palyas - each vegetable is cooked separately with basically the same spices throughout the whole book, but in different ways. The food is really clean and light.

Mysore Style Cooking is really simple to cook and it is really delicious. When you go to Indian restaurants in Australia they don't seem to have any desserts which I don't get. In India you have a lot of desserts and it has a lot to do with what fruits are available in each season. You can have a fruit salad but it is made in a really different way.