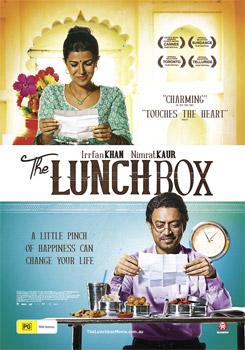 Synopsis: Middle class housewife Ila is trying once again to add some spice to her marriage, this time through her cooking. She desperately hopes that this new recipe will finally arouse some kind of reaction from her neglectful husband. She prepares a special lunchbox to be delivered to him at work, but, unbeknownst to her, it is mistakenly delivered to another office worker, Saajan, a lonely man on the verge of retirement. Curious about the lack of reaction from her husband, Ila puts a little note in the following day's lunchbox, in the hopes of getting to the bottom of the mystery.

This begins a series of lunchbox notes between Saajan and Ila, and the mere comfort of communicating with a stranger anonymously soon evolves into an unexpected friendship. Gradually, their notes become little confessions about their loneliness, memories, regrets, fears, and even small joys. They each discover a new sense of self and find an anchor to hold on to in the big city of Mumbai that so often crushes hopes and dreams. Still strangers physically, Ila and Saajan become lost in a virtual relationship that could jeopardise both their realities.

Mumbai-s Dabbawallahs are a community of 5000 dabba (lunchbox) deliverymen. It is a hereditary profession. Every morning the Dabbawallahs deliver hot meals from the kitchens of housewives to the offices of their husbands, and then return the empty lunchboxes back to the housewives in the afternoon. For 120 years they have provided the people of Mumbai with a taste of home in the office. They navigate through the overcrowded local trains, and chaotic streets. The Dabbawallahs are illiterate; they use a complex coding system of colors and symbols to deliver lunchboxes in the labyrinth that is Mumbai. Harvard University analyzed their delivery system, and concluded that just one in a million lunchboxes is ever delivered to the wrong address. The Lunchbox is the story of that one lunchbox.

Mumbai is a city where the people are like their lunchboxes. The city ferries millions from their homes to their place of work and then back with the evening commute that moves them along like items on a conveyor belt. In a constant race that Mumbai imposes upon its residents, they can never stop to ponder their dreams or what became of them. However, the big city that can be so cruel can also be benevolent. This story evolved from the story of the one in a million wrongly delivered lunchbox to the story of how hope can sometimes come from quarters we least expect. Through this journey and a small miracle of the big city, the characters become something other than lunchboxes.

I find myself drawn to stories that have a sense of how ridiculous life can be at times, and in finding something interesting in the mundane. There is a strong resonance of this in The Lunchbox where the characters find out that they have forgotten many of the things that have happened to them because they didn-t have anyone to tell them to until now. The subtle magical realist elements in the story question the audience about their own faith in all that is fantastical.

Both of the main characters in The Lunchbox live in a type of prison. Ila, in the prison of her marriage, and Saajan in the prison of his past. The story is as much about the hand of fate that guides our life as it is about the choices we have to transform our lives when we so wish. A pivotal character in the story is Shaikh, Saajan's new office colleague and someone who he has to train to be his replacement. Shaikh is a survivor, he is an orphan who has kept his own name and made his way through life in a tough city. Shaikh seems naïve but he is not a victim of his circumstances. Over time, a father-son relationship develops between the older Saajan and the young Shaikh as Saajan emerges from his prison.

Ila lives in Kandivili, the conservative middle class Hindu enclave. And Saajan lives in Ranwar village, Bandra, an old Christian neighborhood. It was important to the story that these two characters would have never crossed paths if it were not for this lunchbox delivery mistake or a miracle of the big city. There are many Mumbai's within Mumbai. Their disparate worlds and backgrounds also make this the story of hope that can sometimes come from the most unexpected quarters. Beneath the locale that surrounds and is imbibed in them, there is an old worldliness about these characters. They do not fit into the present times, they both love the old TV shows from the 80s, and the old Irani cafes of Mumbai. The device of letters between the two characters that moves the story forward also has an old worldliness and nostalgia about it. This movie is really infused with my nostalgia for the early 80s when I was growing up in Mumbai.

Working With The Cast

The process of working with Irrfan was very organic, he was there to discover the deeper meaning of the script and read between the lines, as I was. He was very invested in the script from our early discussions and we had several meetings before the shoot, then I'd go home and rewrite after each discussion. He made this character his own in wonderful and unexpected ways. For the characters of Saajan and Shaikh, I always had Irrfan and Nawazuddin Siddique in mind and I was thrilled when they came on board. For the character of Ila, we had 4 months of auditions and meetings in Mumbai, and met a wonderful actress from the theater called Nimrat Kaur. Each actor had their own method of approaching the script. I often felt like three different directors in the body of one while directing this movie. Nawaz wanted to improvise to be in the moment because the character of Shaikh says unexpected things and is full of surprises, and so we improvised with great results. Nimrat lived the part of Ila for three months before the shoot. Her story is entirely set in a tiny Mumbai apartment, and we dressed up and rehearsed on location for three months with her and the little girl who plays her daughter.

It is difficult to make delicate cross genre movies in India because a majority of the audiences for off-Bollywood Indian movies are outside of India. I hope The Lunchbox finds an audience in India as well. I hope the humor of the story brings the local audience in and they are happy to discover the underlying deeper story. India is changing, and stories that truly reflect the Indian condition will find audiences in India sooner rather than later. I would love to make a genre movie, but for me to be invested in it creatively, I would need to infuse it with a strong emotional core. I would need to be able make it personal.