Tully On Tully Miles Away Tour 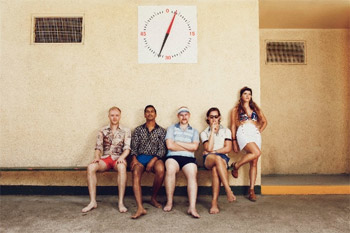 Tully On Tully Miles Away Tour

Off to a flying start in 2016, hot on the heels of an intense period of song cultivation and recording Tully On Tully are taking their refined new material to the stage.

Playing a string of headline shows around the country in support of their sophomore EP Miles Away set for release in May, the band's live performance is guaranteed to highlight their new music, peaking with energy and unperturbed confidence.

Miles Away was written whilst the band were abroad in New York City and represents their experiences in the insomnolent metropolis and the tyranny of distance. Upon their return to Australia Tully On Tully retreated to a recording studio in the Victorian highlands to put their new work to wax.

Deviating stylistically from their last release, on Miles Away the band harness a myriad of sounds and influences. From the stadium drums of the 1980's, aurally engulfing guitars of The War On Drugs to carefully honed synthetic sounds akin to TV On The Radio or Phantogram.

Tully On Tully recently worked with Diana and Leo of the Around The World In 80 Music Videos Project to produce latest video clip for -Honestly'. A collection of 2,500 still images, the band wanted to highlight the city they call home, Melbourne. Watch the video here.

The Miles Away tour kicks off later this month and sees the band join festival line ups at The Hills Are Alive and Moonee Tunes.

Thursday May 26 - Bar On The Hill, University of Newcastle NSW (Lunchtime Gig)