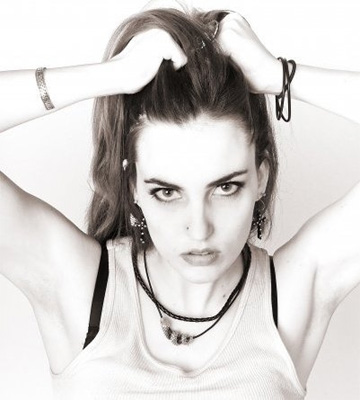 "Throw your words at me, I'll have my way with them," mocks young and sharp-tongued singer, guitarist and songwriter, Alexx Calise.

Delivering a sound that is both fresh and uniquely hers, Calise combines hard rock, electronica, and urban-edged pop with crunchy guitars, angsty lyrics, and an instantly identifiable vocal that is hauntingly beautiful and completely raw all at once.

Calise grew up in Fort Lauderdale, Florida, where she spent her childhood mostly alone or in the pages of a notebook, finding comfort only in her parents' vast record collection, which included everything from Mozart to Led Zeppelin. At 11, she picked up the guitar to emulate her father, also a talented musician, and began fusing the melodies she heard in her head with her own poetry and recitations.

Now living in Los Angeles, California and continuing along the same path, Calise is endorsed by over 13 music gear/clothing manufacturers, she has appeared in several national TV commercials and shows. Alex has also featured in Blender magazine, Guitar World, and the how-to/method book, 'How to Succeed as a Female Musician' alongside such notable musicians as Lisa Loeb and The Donnas.

The song Out of Sight features on the new album and is a soulful pop sound that combines great lyrics with a rock guitar and a talented voice. The rhythm of the background music complements the song and electronica feel.

Currently, Calise is recording the follow-up to her 2007 critically-acclaimed debut album, Morning Pill, as well as her debut album with other music project, Sound of Cancer (with accomplished drummer/songwriter, Dennis Morehouse). Both albums will be released simultaneously in January of 2010.

How did it feel to hear your songs played all over the airwaves and on the television?

Alexx Calise: It's always a bit surreal. Whenever I hear my songs on the radio or on TV, I feel like it isn't happening, or there must be some kind of mistake. I've never jumped up and down and danced in the streets like Liv Tyler did in "That Thing You Do" when she heard the Wonders on the radio. Maybe that's what you're supposed to do, but I am always really blown away by it every time, like how the hell did I get here and what did I do to deserve this?

Alexx Calise: I think I was pretty correct in assuming that the industry would be cutthroat, vile, pretentious, and sleazy...and the worst part about that is, that's the good part, haha! In all seriousness though, you have to watch your back. You can't be too trusting. Everything you've ever heard or seen about the entertainment industry is probably true, so you just have to have a good head on your shoulders and most importantly, develop a thick skin.

Alexx Calise: I do. My inspiration doesn't come from one specific place or thing. I usually just channel this weird energy from the heavens and spit something out. However, I do seem to touch on darker subjects quite a bit. Whenever I tell my dad, "I wrote a new song" for example, the first thing he says is "is it another ball and chain one?" Haha! That's not to say I'm a doom and gloom kind of person (because I'm generally pretty positive), but if I didn't get those kinds of songs out, that may not necessarily be the case anymore.

Alexx Calise: I am a lover of all types of music, and I've grown up on bands like silverchair, Stone Temple Pilots, Marilyn Manson, The Toadies, Our Lady Peace, Muse, The Doors, Soundgarden, Archive, Kenny Wayne Shepherd, Jonny Lang, and Aerosmith.

Alexx Calise: Right now I am finishing up my new records, which will be released in January of 2010. One will be the second record for my solo project, Alexx Calise, and the other will be for Sound of Cancer, my other music project with my songwriting partner, Dennis Morehouse (drummer for Gilby Clarke, Marc Ford). We're gearing up for a major PR push for both projects next month, so you'll be seeing a lot more of us in the coming months. We're also hoping to do some more touring throughout Southern California the beginning of next year.

Alexx Calise: Only every other day. All kidding aside though, yes, I've had moments or days when I've been so low about my career, I just wanted to put down my guitar and never look back. However, I know that if I ever quit, I'd never forgive myself, and I'd never know what could have been. I play because it's all that I love, and all that I know how to do. You really have to be in it because you love it, because that "pot of gold" so to speak may never be at the end of the rainbow for you.

Alexx Calise: Performing live any day. I absolutely loathe recording actually, and I cringe every time the red light goes on. I know it seems a bit odd for a musician to be like that, but I feel like the pressures on every time I record. When I perform live, I completely let go, and am able to do things that I can't (or feel like I can't) when I record (which is usually the other way around for some singers). Although, there are some things you're able to do while recording that you can't execute easily live. For example, when I record for my other project, Sound of Cancer, we'll do an immense amount of vocal layering and harmonization, so it sounds like I'm being backed by a choir. Obviously, I can't bring a choir up on stage with me every time I play live, so we have to come up with other methods to fatten up the live sound sometimes.

Alexx Calise: I wouldn't say there was a particular thing that inspired me to go into music; I just think that music chose me. It's kind of unfortunate sometimes when I think about it, because I'm a smart girl. I have ambition. I could be pulling in a 3-figure salary and have a 5-series BMW if I had just stayed in school and gotten a degree in business. Alas, I'm an artist, and have none of those things and all of the trademark emotional torment that comes packaged with every artist ;)

Alexx Calise: Definitely keeping positive. There are so many highs and lows in this business, it really messes with your head sometimes. One minute you're being played on a major radio station or on a major network, and the next minute, you're asking "would you like fries with that?" It's such a weird dichotomy.

Another thing that I've had to overcome as well is negative criticism. Because I've always been a very, very sensitive person, I have to be careful not to take it too personally when a critic gives me a bad review or has bad things to say about me when they've never even met me before. The truth of the matter is, everyone has a different opinion, and not everyone is going to like you or what you're doing. To reiterate, you really have to develop a thick skin, and you have to learn to just let it go. Sometimes I forget that I used to be an entertainment columnist, and that I also used to rip on artists. Now I know how it feels to be on the receiving end. Karma baby, karma.

Alexx Calise: Well, craziness typically ensues. I get up, get on the computer, begin researching and promoting, work out, practice, write or finish touching up a song, record, rehearse, maybe watch a few minutes of Family Guy or South Park, and go to bed. I wouldn't say I have much of a social life, but then again, I guess I never have. I've always just invested all my time in music.

Alexx Calise: I think my favorite part has to be performing. I suppose it's a form of validation for me, and it makes all of the hard work I do every single day worth it. Every time I see someone in the audience responding to my performance or mouthing my lyrics back to me, I get this incredible rush, like I can do anything.

Alexx Calise: Probably Daniel Johns from Silverchair, Raine Maida from Our Lady Peace, or Kenny Wayne Shepherd. They're all extraordinary musicians, and I aspire to be like them musically.

Alexx Calise: Sorry guys, but I am in a relationship. When I was still in the "game" so to speak (haha), I tended to look for (but not always find of course) guys who were able to make me laugh, who treated me with respect and who were pretty low-maintenance. Thankfully, I was able to find someone who embodied all of those things and more, and we've been together for nearly 2 years now.

Alexx Calise: Sure. Visit www.alexxcalise.com There, you can find out all the latest AC news, listen to my tunes, and read my blog.


60 Second Quiz
Full Name: Alexx Calise
Nickname(s): "AC", "Calise"
Star Sign: Cancer
Music Talent: Singing, songwriting, guitar playing
Favorite Food: Chicken, quesadilla
Favorite Film: American Beauty
Favorite Actors: Kevin Spacey, Anthony Hopkins
Pet: Not yet. Would love a kitten though.
Describe yourself in 3 words: Shy, ambitious, emotional
Best Feature: Eyes
Worst Feature: Posture, if that counts...
People You Would Most Like to Meet: Living: Alexandra Patsavas (one of the industry's leading music supervisors), Marilyn Manson, Trey Parker, Daniel Johns from Silverchair, Dead: Janis Joplin, Stevie Ray Vaughan, Jim Morrison
Hobbies/Interests: Music, songwriting, writing, running, reading, researching, playing around on the internet
First Job: Working at my father's office as a file clerk. I wouldn't say it was fun or intellectually stimulating, but at least I made enough to buy all the new rock records that came out.
Are you a Pub, Bar or Club kind: I'm a homebody. I'm only 24, but you'd swear I'm 65. If I had a choice of going out or staying in, I'd be at home, with my nose in a book, or maybe watching reruns of the Golden Girls or Murder She Wrote. Haha.
What Can You Never Leave Home Without: Probably my cell. Since I do so much business over the phone, I'd be like a knight without armor or a king without a crown.
What is the first thing you think of when you wake up in the morning: "Ew, kitten breath..."