Children around the country will be entranced by Barbie™ with the launch of a magical range of products inspired by the much anticipated third release of the DVD Fairytopia™ series; Barbie™ Fairytopia™ Magic of the Rainbow™.

Barbie™ returns as the brave fairy Elina™ and faces a new challenge: to attend fairy school and learn how to use her miraculous fairy powers to perform the annual Flight of Spring.

Unfortunately Elina's™ old enemy, the evil Laverna™ has returned and plans to put the freeze on springtime by plunging Fairytopia™ into a ten year winter. Elina™ turns to her new fairy friends and together they work as one on their biggest adventure yet to save Fairytopia™!

This fantastical story is a celebration of the power of friendship and that true strength comes when you work together with friends. In June a captivating collection of Fairytopia™ toys will be unveiled including the Fairytopia™ Elina™ Doll and DVD Game to coincide with the new animated Fairytopia™ DVD movie.

Winner of the Girls Toy of the Year at the 2007 Australian Toy, Hobby and Nursery Fair, the Fairytopia™ Rainbow Adventure™ Elina™ Doll and DVD Game (RRP $54.95) leads girls through a magical wonderland.

The Elina™ doll acts as a remote control for the DVD game. By 'flying' her from right to left, girls can help Elina™ capture the crystals to create a rainbow and save Fairytopia™ just like the movie! The innovative toy will be a hit amongst a new generation of girls looking for an interactive and exciting Barbie™ adventure! 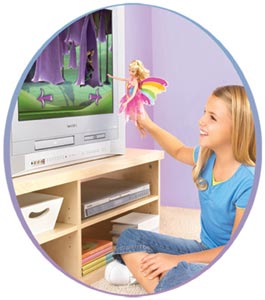 To celebrate the launch of the all-new magical Fairytopia™, Barbie™ is calling all little fairies to experience FREE DVD screenings and meet Barbie™ as Elina™ at select Shopping Centres during the June/July school holidays. Children can enjoy FREE fairy activities in the most whimsical surroundings!

The full range of Barbie™ Fairytopia™ Magic of the Rainbow™ products are out now in major retailers and independent toy stores nationally.

Review: Great way to get kids interactive with the story. The Elina Doll by itself is glamourous with fluttering rainbow wings. The ability to use the doll as a remote for the DVD game adds a new dimension to roll play and interactive story telling. Best suited for kinder kids and early school years. 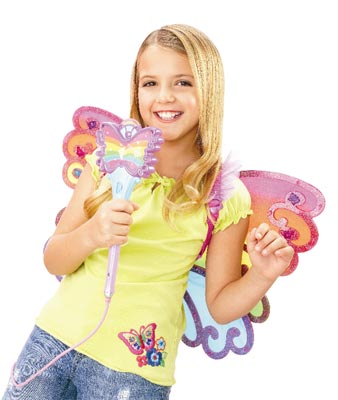 Barbie™ Fairytopia™ Fairyoke Wings™ are musicial rainbow Elina ™ wings with a fun karaoke feature that allows girls to sing along to four of their favourite Fairytopia ™ songs. As they sing into the microphone, they can watch the vibrant flashing lights on their wings thanks to a mirror attached to their microphone.

Review: All little girls love to sing, whether it be in front of their friends or in the security of family. Although 'Barbie™ Fairytopia™ Rainbow Adventure™ Elina™ Doll & DVD game' is brings Barbie toys to a new interactive level, the Barbie™ Fairytopia™ Fairyoke Wings™ has given my 5 year old daughter the most joy. Vibrant colourful wings, that light up, also light up the confidence in her. The microphone resembles a wand and offers 4 fun and easy to learn songs. She really does feel like a superstar as she dances and sings with the Barbie™ Fairytopia™ Fairyoke Wings™


Free screenings of the Barbie™ Fairytopia™ Magic of the Rainbow™ will take place at the following shopping centres during the school holidays: