Chita Eyes on You 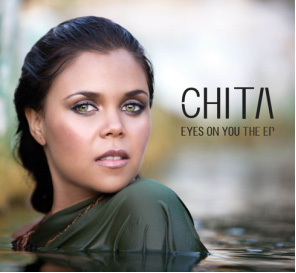 Chita - Eyes on You

Chita is originally from Mauritius, although she was brought up in Australia her French-African heritage provides a variety of music inspirations from Exotic Mauritian and African music to pop and R&B.

Chita was performing in front of large audiences from the age off 11 knowing then that writing and singing music would be a major part of her life. At age 13 Chita had written and recorded her first pop song.

In 2006 Chita released her debut single Dance with Me which was selected for the 2007 Nova Radio Unsigned Initiative.

Chita's music is a unique take on modern pop, described as 'tribal-pop'. Chita's sound is a combination of pop and dance mixed with edgy tribal elements. The first single, Infectious, from her debut EP showcases Chita's amazing voice and proves her songs are upbeat, catchy and unique.

The EP, Eyes on You is co-written and produced by Brisbane based Stuart Stuart of Chartsong (The Veronicas / Small Mercies). The EP contains the lead single Infectious along with five more tracks.

One of the tracks Available placed third in the Australian Songwriting Association contest in the Contemporary Pop/Dance category 2009.

Chita's debut EP titled Eyes on You is due for release in 14th July 2010 available on iTunes and www.chitamusic.com.

How did it feel to hear your songs played off a CD?

Chita: Exciting. A lot of time and effort goes into writing, development and recording so to have the finished product on CD is very motivating and marks the beginning of the next step... sharing it with everyone!

Chita: The music industry has changed so much over the years. The Internet has become the most popular means to discover new music and connect with artists and the music industry has had to adapt to this. I think it's an exciting time as this means new music and aspiring artists can be heard by anyone, anywhere in the world. Every industry comes with it's challenges but if you're passionate about something and believe in it that's what keeps you going.

Chita: Yes. I wrote and recorded my first song when I was 13! I draw inspiration from many things. Sometimes my own life and the people in it and other times it depends on my mood. I feel very inspired when I listen to percussive music originating from Africa and South America. I also like to co-write, two minds are better than one!

Chita: There are so many... to name a few... Alicia Keys, Cat Empire, India Arie, Emiliana Torrini, Rihanna, Michael Jackson... the list goes on.

Chita: The official release date for my first EP, 'Eyes on You' is 14 July 2010! To celebrate the release a launch party will take place at Tokio Hotel, Cockle Bay Wharf ,Darling Harbour on Thursday 22 July 2010!

Chita: No. Music is my passion. Sharing my music with the world is my dream. Sure, there have been times where I thought 'this is really hard right now' but my passion to realise my dream overrides negativity.

Do you prefer performing live or recording?

Chita: Performing live. I love the creative process of writing and developing songs but connecting with other people takes that creativity to another level. For someone to hear my song, my idea and connect with it is a beautiful thing.

Chita: My inspiration comes from my love of singing and writing and my appreciation of music. When I watch a DVD of one of my favourite artists I think to myself, yes, this is what I want to do!

Chita: There was a time when a person expressed their very strong views on what they predicted to be my musical fate, and I let it affect me. I've since learned how to stay focused on my vision and not let things like this get to me. You've just got to surround yourself with passionate and encouraging people -)

Chita: No two days are the same!

Chita: All of it! I love being creative and I love music so every aspect of developing my music and career is inspiring -)

Chita: 1. Follow your heart
2. Love, in all its forms
3. Good food
4. Laughter -)
5. Learn to forgive and treat others with respect, always

Chita: Thank you for your support! I'm inspired by you everyday... Music rocks my world, lets rock the world together!

Full Name: Conchita Henneberry
Nickname(s): Chita
Star Sign: Leo
Music Talent: Singing, writing
Favorite Food: Mum's cooking
Favorite Film: Persuit of Happiness, Forrest Gump
Favorite Actor: Tom Hanks, Wentworth Miller, Katherine Heigl
Pet: Unfortunately no pet... I'd like a puppy!
Best Feature: think that my hair would one of my favourite physical features together with my eyes which remind me of my Mum everyday cause they're just like hers
Worst Feature: There are a few things that I dislike but there's no one thing I'm hung up on
Person You Would Most Like to Meet: Oprah! She is such a strong, inspirational woman!
Hobbies/Interests: I love the beach and enjoy kayaking. I have an interest in interior design, art and acting.
First Job: Sales assistant (jewellery store)
Are you a Pub, Bar or Club kind: Bar for cocktails with the girls, the club to dance
What Can You Never Leave Home Without: Lip balm and mascara and my iPhone
What is the first thing you think of when you wake up in the morning: Coffee

Chita's music is a fresh take on modern pop? a fusion of pop and dance sounds mixed with edgy tribal elements and her resonating voice. Chita's songs are upbeat, catchy and unique. Her "tribal-pop" sound is featured on her debut EP titled "Eyes on you" that is due for release in 14th July 2010.

Originating from Mauritius, Chita's French-African heritage and her Australian upbringing inspires her on so many levels. Exotic Mauritian and African music from her childhood and Pop and R&B from the present day continue to inspire her to create songs that are unique and that she is passionate about. At the age of 11 when Chita first performed in front of a large audience in a musical, she knew that music and singing would be a major part of her life. Chita went on to write and record her first pop song at 13 years of age. Since then Chita has performed with cover bands, supported some very prominent artists as a back-up singer, performed on live television, and written and recorded many original songs. 2006 saw the release of her debut single "Dance with Me" which was well received by local radio and was selected for the Nova Radio Unsigned Initiative in 2007.

8 years of experience singing in original and cover bands

Chita is currently working on new songs and in the coming months she will be doing a number of live original performances to showcase and promote the upcoming release of her debut EP, "Eyes on You".