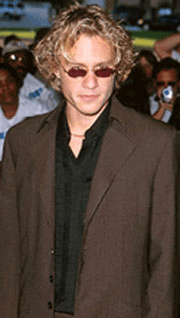 Aussie heartthrob Heath Ledger is fast becoming one of the most popular actors worldwide, having recently starred opposite fellow Australian actor Mel Gibson in the epic drama "The Patriot". Originally from Australia, he now resides in the U.S.

Ledger, who continues to melt the hearts of US audiences with his resonant voice and sexy good looks, got his big American break in 1999, with the release of the satisfyingly cool film "10 Things I Hate About You".

Full Name: HEATH ANDREW LEDGER
**The name "Heath" is based on the character Heathcliffe from the novel Wuthering Heights.**
D.O.B.: 4/4/1979
Star Sign: ARIES

He showed acting potential when he was enrolled in school and preferred to concentrate on Shakespeare. He also excelled at both field hockey and cricket but his passion for drama won over in the end. Having trained in theatre and Shakespeare courses, Ledger began playing small roles on TV. Probably the key to his entire movie star future was a short series made for US TV and shot in Australia called "Roar".

Following on the heels of the success of "The Patriot", his next project will be "A Knight's Tale" which was produced in Prague and will be released in 2001.

As Ledger's star continues to rise so too does the number of fans all over the world.